After 6 months of chasing analytics I’m not using them for anything other than vanity. I check multiple times a day to see who has visited, where numbers are, etc and nothing translates back to the content I’m writing.

This is, to me, the wrong way to do this. As a result I’ve removed analytics from this site entirely for now and will simply continue to focus on the content itself, not on the views that don’t mean anything.

I have analytics on Initial Charge, but check them very rarely. I’m not chasing views anymore. I write because I want to share my thoughts and the exact number of people that read them is inconsequential.

It also doesn’t show a complete picture. Some number of people read this site entirely by RSS and are never counted in the stats. And then, of course, there’s all of the folks using ad blockers that prevent the stats script from even running. I’ll never really know how many people read what I write, but I still think having stats is valuable so I can see more broad trends across longer periods of time.

Today, I’m excited to announce that anyone can now sign up to use our new Web Analytics — even without changing your DNS settings. In other words, Cloudflare Web Analytics can now be deployed by adding an HTML snippet (in the same way many other popular web analytics tools are) making it easier than ever to use privacy-first tools to understand visitor behavior.

It looks like a nice service, but I think I’ll be sticking with WordPress.com stats through the Jetpack plugin. I like having the WordPress mobile app’s stats widget on my iPhone, WordPress.com stats gives me all the information I want, and it’s an opportunity for me to dog-food Automattic’s services.

Umami is a simple, easy to use, self-hosted web analytics solution. The goal is to provide you with a friendlier, privacy-focused alternative to Google Analytics and a free, open-sourced alternative to paid solutions. Umami collects only the metrics you care about and everything fits on a single page.

Here on Initial Charge, I don’t plan on switching from WordPress.com’s stats through Jetpack. But if I was looking elsewhere, Umami looks like a nice option.

Despite Shaun Inman’s announcement late last year that he was suspending sales and support for Mint, I’ve continued to use the software to track visitor statistics on Initial Charge. In the eight years since I first installed Mint on my server, I haven’t found anything that offers the same level of simplicity, clean design, and overall peace of mind about where my stats data is stored.

I’ll continue to keep my eye out for alternatives, but nothing’s unseated Mint yet. Piwik and Tiny Stats came close. But no one I know that has tried Piwik has stuck with it and when I tried Tiny Stats, I ran across a few bugs that soured the experience for me. I’ll probably move to something new eventually, but I don’t foresee that happening anytime soon. 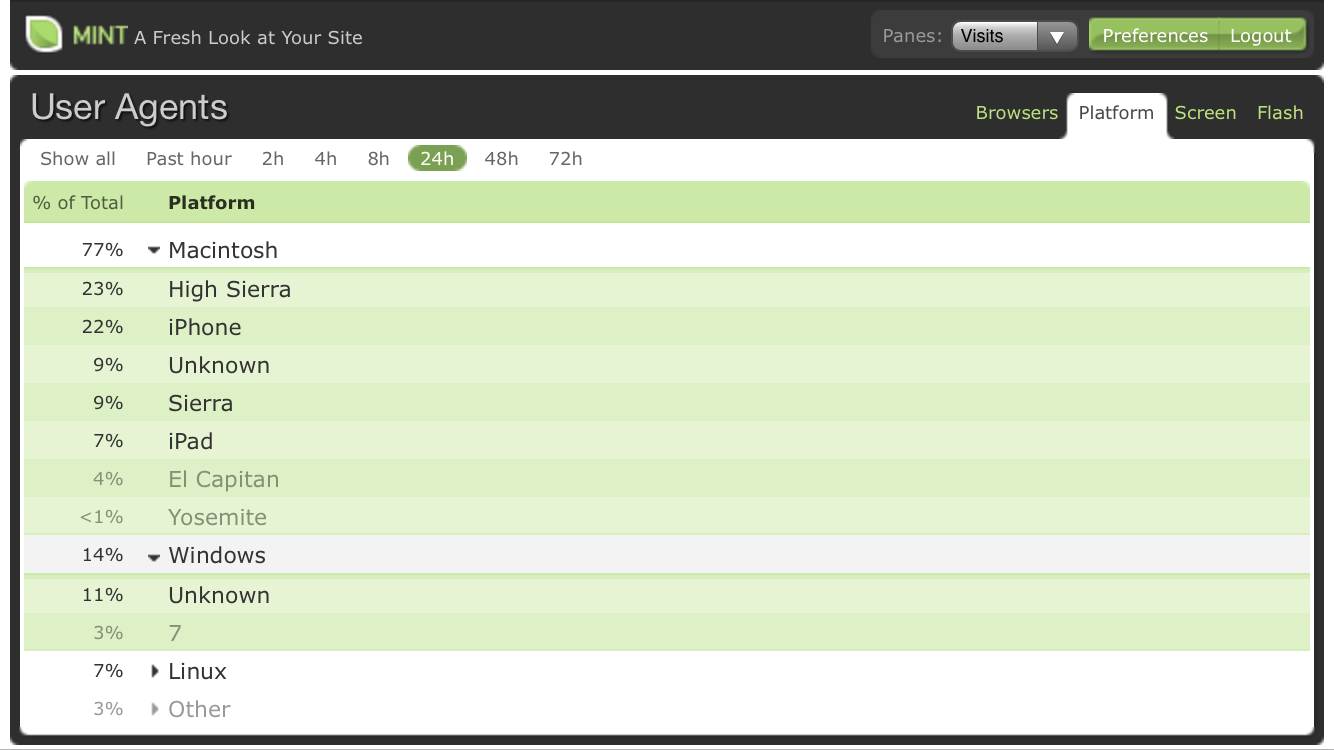 With my continued use of Mint, there is one bit of code that will have to be updated regularly — the list of recognized operating systems in the User Agent 007 pepper. For those who are unfamiliar with Mint, the software has support for plugins, called “Pepper”, that can enhance the core software’s features. User Agent 007 keeps track of what browser and operating systems your visitors are using, as well as the display resolution and whether or not they have Flash installed (which is far less useful in 2017 than it was in 2007).

In order for UserAgent 007 to recognize operating systems newer than Windows 8 and Mountain Lion — which were added in the last update — you’ll have to edit the class.php file located in mint/pepper/shauninman/useragent007/. I highly suggest making a backup of this file just in case something goes wrong. 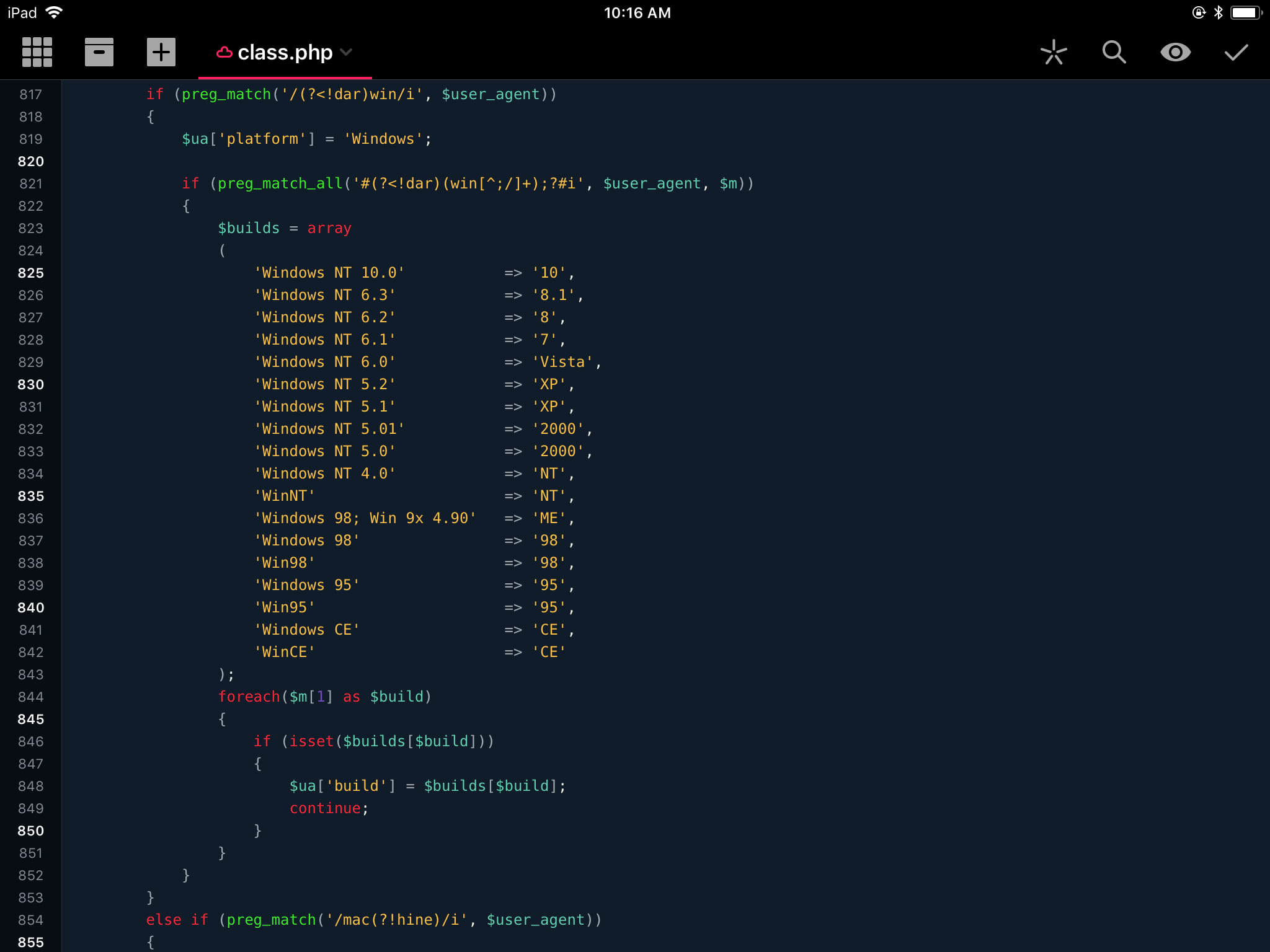 Within class.php, you’ll want to look for an array that tells Mint how to determine what version of Windows the visitor is using. If you’ve never edited this file before, the top entry in the array should be Windows 8. To add support for Windows 8.1 and Windows 10, simply add the following two items above the Windows NT 6.2 entry, just as I’ve done in the image above. 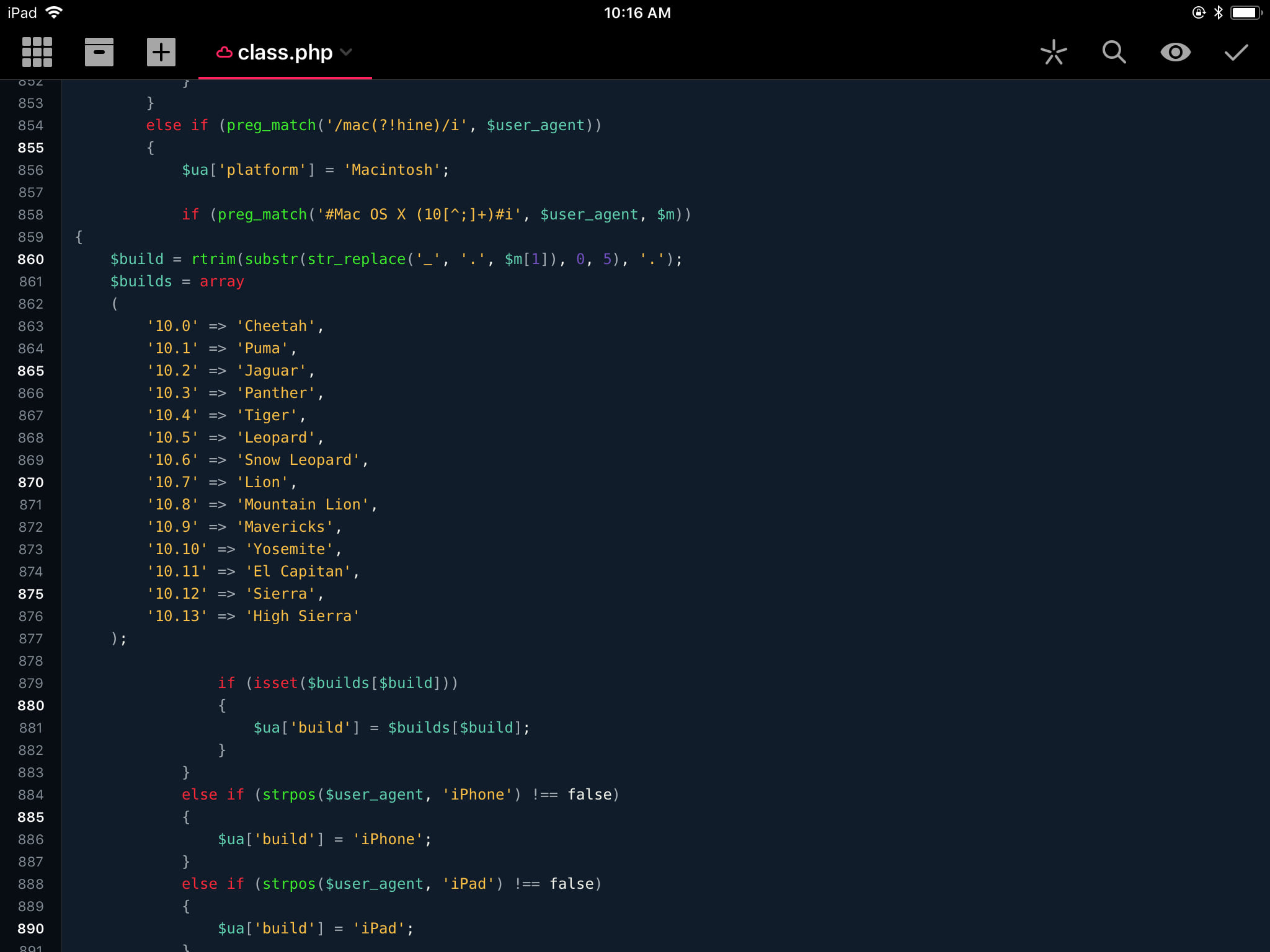 Scrolling down a bit further within class.php, you should find an array with versions of macOS listed. The last one should be Mountain Lion. To add support for newer versions of macOS, be sure to add a comma after the Mountain Lion entry and add the following five items, just as I’ve done in the image above.

Unfortunately, this doesn’t retroactively change the statistics that have already been recorded. But eventually, the “Unknown” listing will be replaced in your short-term platform stats with properly identified operating system names. And without officially released updates to the UserAgent 007 pepper, as long as you’re still using Mint, this process will have to be repeated as new operating systems are released with the correct version number and OS name. But this will certainly add some longevity to Mint for us users who aren’t ready to move on just yet.

Had Shawn [Blanc] followed what his analytics told him though, he would still be writing about Reeder. And I am sure that would have been great writing, but he would have never changed my life with The Focus Course — nor the lives of many others he has touched through his writing of late. […]

If you are starting a new blog, or have one already, the best thing you can do is turn off all analytics. If you are worried about knowing when your site is “big” then worry no more. Trust me when I tell you: you will know when you site is big, with or without analytics, I promise that you will know.

This is advice that Ben has suggested in the past and something I was strongly considering, but eventually rejected because I thought I’d be better off having the information than not. But, I’m starting to think I should at least limit how often I check my analytics. I’m probably spending too much time thinking about where traffic is coming from and what my most popular pages are — that’s time that would be better spent writing.

Although I’m not going to join Ben by removing analytics from my site entirely, I do plan on making a concerted effort to check my Initial Charge’s statistics far less frequently.

It’s looking more and more like the iPhone 6c is going to be a 2016 thing.

I’m going to keep running both analytics tools for a while to see if these early results stand up over time, but I’m encouraged so far. And this may turn out to be more than just a conscience assuager. If Safari’s new content blocking leads to extensions that prevent Google Analytics from working—and those extensions become popular—self-hosted tools like Piwik may become the only game in town.

I still haven’t taken the time to install Piwik, but now that I no longer have a t-shirt project to get off the ground I’ll be able to dedicate some time towards it.