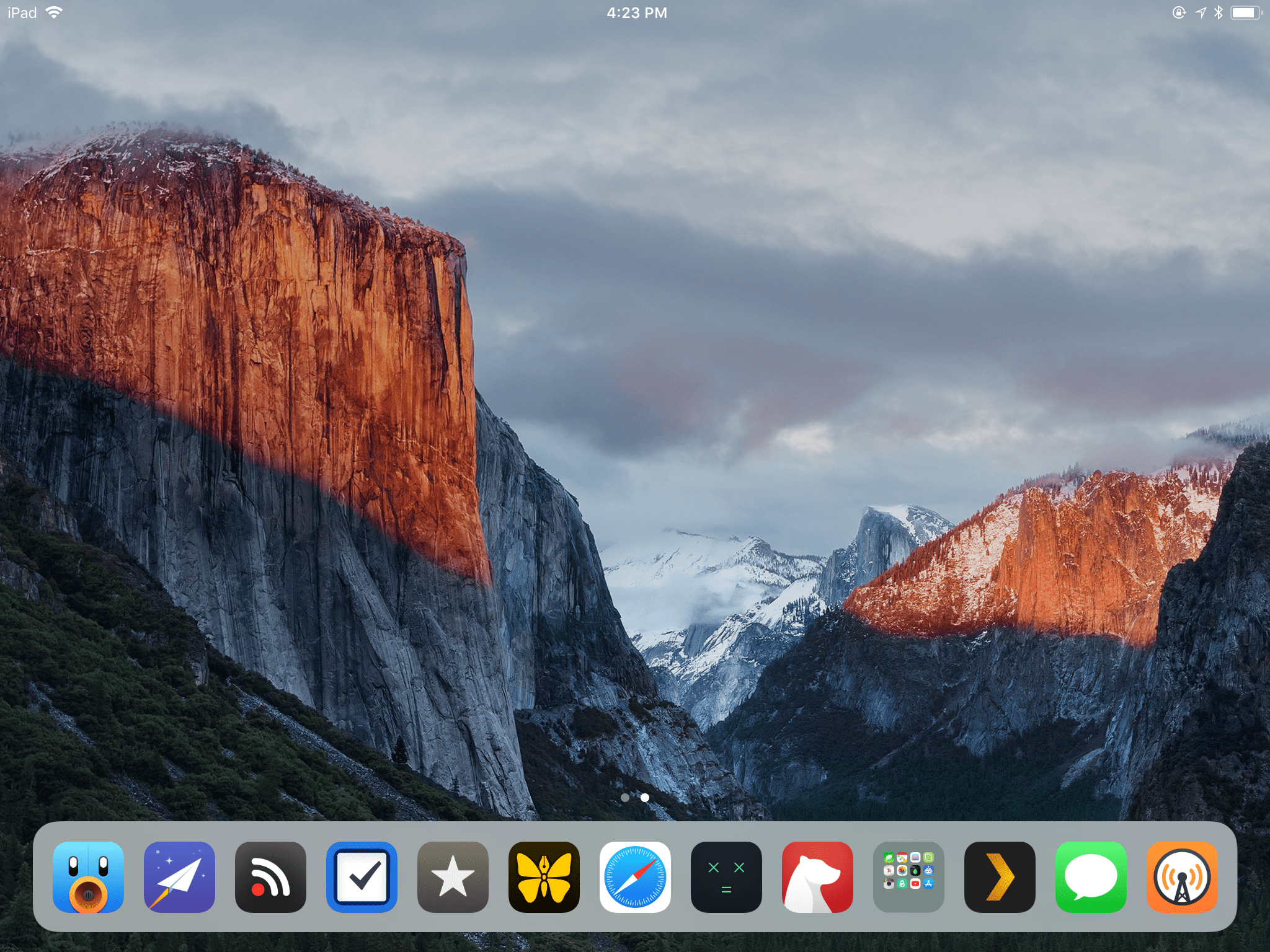 As you may have noticed, there have been some massive changes to the way I organize my iPad’s home screen. It’s an experiment at the moment, influenced by folks like David Sparks and Peter Jang who have optimized their home screen for iOS 11’s new multitasking features. I’ve wanted to give this a try since last fall, but never got around to it until now.

I’m no longer using my beloved linen wallpaper and have replaced it with the default background from El Capitan, which can be found in Stephen Hackett’s macOS wallpaper collection. The linen texture shines as a backdrop for text and icons, but doesn’t hold up well on its own. I was already using the El Cap wallpaper on my lock screen and now that there are no icons or text to obscure it, I thought it was fitting to use on my home screen as well.

I’ve been enjoying the setup so far. At least for the most part. I like having quick access to more applications — twelve in the dock’s top-level, rather than the ten I had before. And I actually like having a folder in the dock where I can place less frequently used applications that I might want to open in Split View — a process which is significantly better when the second app you’re launching is located in the dock. But I don’t really feel like I’m making good use of the system’s capabilities.

On the Mac, I often utilized the desktop as a temporary holding place for all of the files I was working with. They were easy to find — often just a ⌘+H away — and because I kept my desktop tidy, I was never distracted by any superfluous documents. But on iOS, app icons are the only items that can be placed on the home screen and not having any there feels like a waste.

And this home screen strategy also introduces an additional interaction to reach certain apps. A handful of my frequently used apps, that were previously just a single home button click away, now require a swipe and a tap before I can launch them. Having a folder in the dock is useful for quickly launching more apps into Split View, but it can get in the way if you’re just trying to launch an app that could have alternatively been placed on your home screen.

I plan on living with my current setup for now, but in a week or two, there will almost certainly be app icons back on my home screen. I think my best plan of attack is to start moving apps out of the dock that I never open in Split View. That category of apps seems well-suited for the home screen. But I’ll have to see how it plays out when I actually start shifting things around. 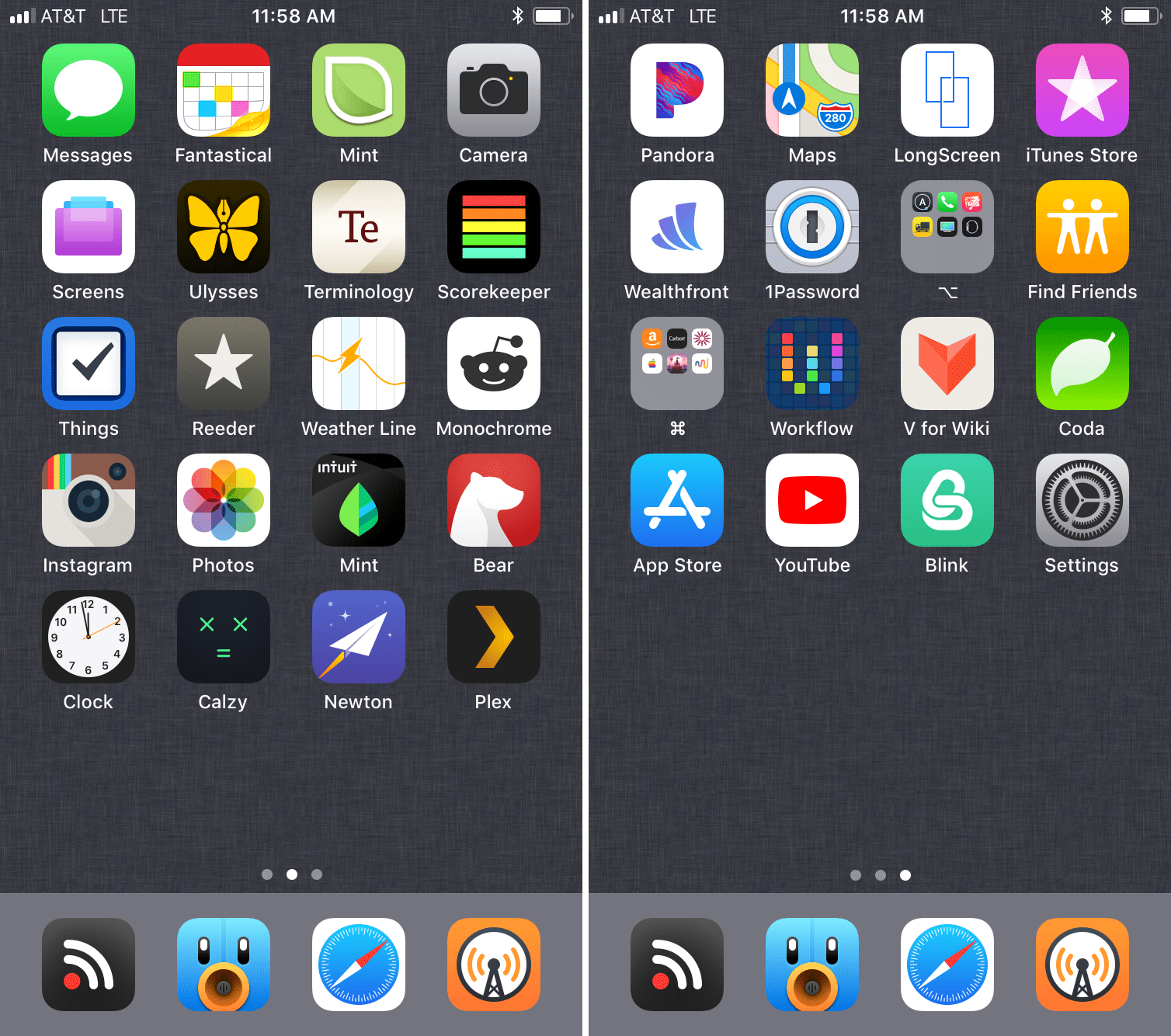 I’ve switched back to Tweetbot from Twitterrific. I wrote about it in early March, but in short, the folks at Iconfactory just made too many design decisions that I disagree with. Tweetbot is far from perfect, but it’s much closer than any other Twitter client available.

I’ve also been testing Monochrome for browsing Reddit on my iPhone. I downloaded it upon Matt Birchler’s recommendation and it’s a great app. As Matt notes, it handles GIFs quite well, playing them in-line without having to tap on them first. It sounds like a minor feature, but it really improves the Reddit experience.

I mentioned Calzy in last month’s update and it has become my go-to calculator app. It’s highly customizable and thoughtfully designed. I’m still a huge fan of Llumino and Calcbot, and I’ll probably use them again in the future, but Calzy has been a pleasant change of pace.

I’ve deleted Dribbble and Product Hunt from my devices. They’re decent apps, but I just never launched them. I suspect Dribbble will return when I start doing more web design work, but for now, I don’t need it.

I won’t go into the specifics, but my wife and I used some of our tax return money to open a Wealthfront account. We’ve had our eye on the service for quite some time and now that we own a home, we thought this was the perfect opportunity to start saving for the long-term. Wealthfront’s app is easy to use and looks gorgeous. I’m not going to recommend it exactly — you should always do your own research before making any investments — but I can say that we’ve been very happy with it.

And lastly, I actually have a game installed on my iPhone again — something I typically prefer not to do. But Alto’s Odyssey is just too darn good. For anyone interested, I’m at level 33 and my high score is 123,265.

Still no changes on the Apple Watch front. I’d like to spend a little time searching for some new Watch apps to refresh my setup, but with the massive changes I’ve made to my iPad home screen, I suspect that will capture most of my attention over the next several weeks.