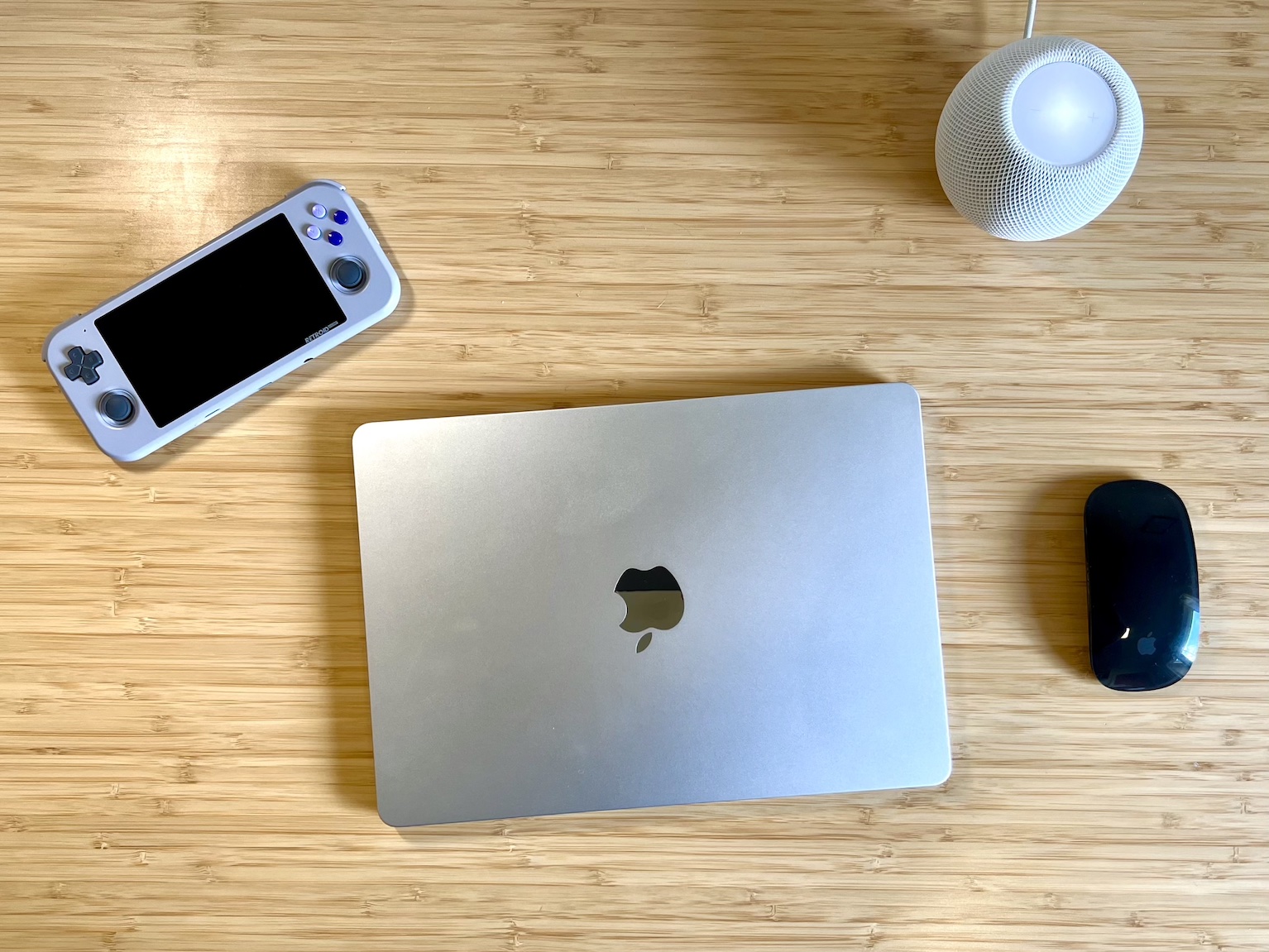 Automattic has a pretty generous laptop replacement policy — there aren’t too many restrictions on what I can get. Essentially, we have a limit on the amount of storage and memory we’re able to select, but beyond that we have the option of ordering any of Apple’s notebooks. It’s an interesting position to be in.

With this much freedom, the major deciding factors (for me at least) are physical size and performance. The last go-around, I opted for a 13-inch MacBook Pro with Touch Bar. It was a nice machine and served me well over the past two years, but I was more than ready to upgrade.

This time, I ordered an M2 MacBook Air in silver with 24GB of memory, 10-core GPU, and 512GB of storage. I thought I’d share my thoughts on each of the major aspects of the new machine.

The differences between the 13-inch MacBook Pro (2020) and the M2 MacBook Air seem so minuscule. All Apple laptops are thin and light these days. But the M2 Air is about 12% lighter than the MacBook Pro, which is definitely noticeable in my bag and when carrying the machine around the house.

I was a little concerned that it would be even worse for the MacBook Air with that additional depth. But I guess the thinner chassis more than made up for it. It’s actually easier to put the M2 in and take it out of my bag than it was for the Pro.

Moving from four Thunderbolt ports to two Thunderbolt ports plus MagSafe would likely be a deal breaker for others, but it’s made absolutely no difference for me. I don’t actually connect much to my laptop. On the rare occasion, an external drive or SD card adapter, but more often than not I’ll use the ports to top-off my iPhone or AirPods. Two ports are fine for my needs.

MagSafe is an interesting feature for me. Despite my affinity for it on older laptops, I haven’t even used it on the new MacBook Air and I’m not sure I ever will.

At my desk, I have a single USB-C cable running from a power adapter to the desk surface. I use that same USB-C cable to charge my MacBook, iPad, Retroid Pocket 3, and most other devices I use (since most charge over USB-C). It’s nice having just a single cable for all of this — I can just swap it to whatever device needs charging the most.

If I used MagSafe, it would be a dedicated cable only for use with my MacBook. That would mean I’d have to keep another cable around for charging everything else. But it’s not like I’d get any of the benefits of MagSafe at my desk. It’s not really possible to trip over the cord because of it’s positioning. It’s all downside.

Similarly for travel, if I took the MagSafe cable with me, it would be a dedicated cable that only works with my MacBook. I want the cables I bring to be usable by as many devices as possible. I’ve even gone so far as to buy little USB-C to Lightning adapters, so the cables I use for my iPhone and AirPods can also be used to charge everything else.

I would see the benefits of MagSafe while traveling, since it’s more likely I’d be in scenarios where the cable can be tripped over, the battery life on this machine is incredible. I can be strategic about when I charge my laptop to limit the chances of the cable being tripped over.

MagSafe just doesn’t seem worth it at this point when compared to the benefits of a universal cable.

Speaking of battery life. It’s amazing. I’ve had a few days where I’ve tried working my entire day from battery alone and ended at around 30% each time. None of those days included any Zoom meetings, but I didn’t make any adjustments at all — no dimming of the screen or avoidance of apps, it was just a normal day for me.

I’m pretty confident that, even on days with meetings, I’d be able to make it through without much trouble at all.

It stinks. It really does. Hopefully Apple will find a better way. Maybe the Dynamic Island will make an appearance in future Apple laptops, but even that is a stop-gap measure until they eventually find a way to hide all of that tech seamlessly behind the display.

Until then, I’m using Boring Old Menu Bar to hide the notch. With a black menu bar, I forget that the notch even exists. Until I open Thunderbird and notice the massive gap between the “Window” and “Help” menus. Or my mouse cursor disappears underneath it.

The last two laptops I’ve used were of the Space Gray variety. It was time for a change. Silver is classic and looks better as it ages. It doesn’t show scratches as easily, which tend to accumulate around the ports especially.

The Touch Bar was not a good feature. The idea of having a specialized interface for each application sounds like a neat idea on paper, but in practice, I would just rely on the keyboard, mouse, and trackpad for interact with my apps. Eventually, I switched the Touch Bar to displaying the exact same interface regardless of what app was running and everything it contained just mimicked the functionality of a traditional function row.

There is one single feature that I miss about the Touch Bar, though — an indicator for Fast User Switching.

For those unaware, you can actually use Touch ID to quickly switch between user accounts on your Mac. I have a user account for work-related tasks and a separate one for personal tasks. This way I can remain focused while working and have a separate environment when I take breaks and want to check in on Mastodon or something similar.

With the Touch Bar, I could rest my finger on the Touch ID sensor that’s associated with my personal account and there would be an indication displayed that I can press the button to quickly switch accounts. This same functionality exists on Macs without Touch Bars, but the indicator isn’t present.

This can cause some annoying results. Touch ID can, in some instances, misread your fingerprint and then when you press the button, you’ll just be kicked back to the Lock Screen where you’ll have to select “Switch User” and then login to the other account. This never happened with the Touch Bar because the system would indicate when it was ready to switch to the other account. Now I just have to set my finger on the sensor, wait a moment, and then press it, hoping that it will switch to my other account like I want it to.

I wish Apple would add an indicator of some kind on the system’s main display to mimic the Touch Bar’s functionality in this process. It would do a lot to smooth out the rough edges.

It’s incredible how fast this machine is. And that Apple was able to build it without any active cooling system. It’s faster than any computer I’ve ever owned in my life and is completely silent under full load.

For comparison’s sake, here are the Geekbench 5 results I received on the M2 MacBook Air alongside the results from a few other devices:

I’m not sure if there’s all that much to say beyond that in regard to performance. It can handle everything I’ve thrown at it and then some. At this point, the performance of my machine isn’t a limiting factor for my workflows.

I love this machine. Great performance and incredible battery life in a thin and light chassis, what more could you want? The notch is really the only blemish of note and there’s ways to hide that with software to minimize it’s annoyances.

Unless you really want a larger display from the MacBook Pro or you need to save $200 with the M1 MacBook Air, this is the laptop to buy.