It’s been a while since I last published my iPhone Home Screen and quite a bit has changed. I’ve swapped out a lot of apps, started using a new social networking solution, and have made efforts to minimize the prominence of work-related apps. 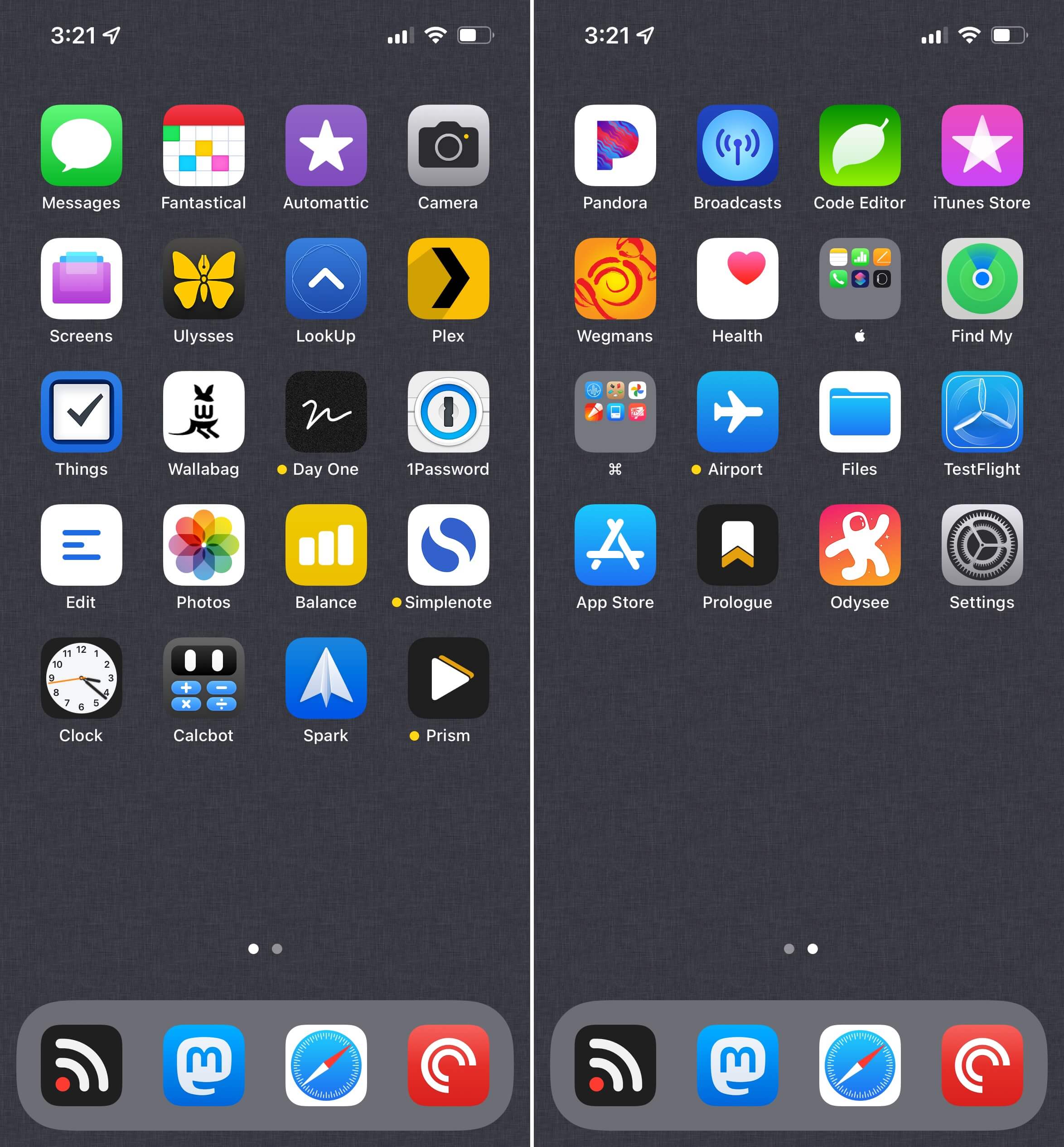 I’m not going to get into the tedium of my second Home Screen, mostly because it’s comprised of apps that I use significantly less than the ones on my first Home Screen. If you have any questions about the apps, feel free to get in touch.

Messages — My friends and family still predominantly use iMessage and text messages work just fine for those who don’t.

Automattic — A shortcut that displays a list of work-related apps and launches the one I select. I could use a folder for it, but I like having a nice clean icon without any notification badges.

Camera — I have a two-year-old, so I take a lot of photos.

Screens — For managing our home server and assisting with the occasional issue on my mother-in-law’s iMac.

Ulysses — Where I write everything that’s published on Initial Charge.

LookUp — A great dictionary app with some well-designed icon options.

Plex — I maintain a large Plex library with all of the DVDs, Blu-rays, and iTunes content we own. Almost everything we watch as a family lives in Plex.

Things — The first to do list app that really clicked for me.

Wallabag — A read it later service that I self-host. This is the web app that I simply saved to my Home Screen from Safari.

Day One — I started journaling more seriously before my son was born and I continue to this day. There’s less writing in each of my entries now, but a lot more photos.

Edit — A minimal, single sheet text editor that I use for quick, disposable notes.

Photos — Apple doesn’t let you set another app as the system photo library, so here we are.

Balance — Like Automattic, a shortcut that let’s me launch all of my finance-related apps.

Simplenote — I’ve tried a number of note taking apps, most recently Bear, but I can’t help but appreciate the simple nature of Simplenote.

Clock — For setting alarms and time zone referencing, which is especially handy now that my new team at work spans many more time zones than my previous team.

Calcbot — You need a calculator app and Calcbot is a great option with a lot of character.

Spark — I think I’ve tried every email app available on the platform. None of them are perfect, but Spark comes the closest.

Prism — I maintain a music library in Plex and use Prism for playback. It reminds me a lot of the iPod app from the early days of the iPhone.

Unread — The best RSS app, which I have synced with FreshRSS.

Mastodon — It’s missing some features when compared to apps like Metatext, but the official client is rock solid and there’s been steady development since it launched earlier this year.

Safari — I spent most of this year using Firefox as my default browser, but with the introduction of extensions in iOS 15 and the removal of 1Password’s share sheet extension, I’ve moved back to Safari for now.

Pocket Casts — It was acquired by my employer earlier this year and I’ve fallen in love with it. It’s so nice to have a well-designed podcast app that also supports video podcasts.

Not included in the image is my Today View, which I use frequently throughout the day. It’s a great place to glance at data and launch shortcuts from. I currently have the following widgets:

I have smart rotate enabled on both of the Smart Stacks. The first of which simply shows me featured photos and entries from Day One. The second Smart Stack generally shows me Initial Charge’s stats unless I have deliveries that I’m tracking.