After the API Changes

In light of recent events regarding third-party clients, I’ve had to make some changes to the way I interact with Twitter. I’ve been a diehard Tweetbot user for years and its going to take a bit more than some relatively minor API changes to get me to switch to Twitter’s first-party client. But I’m not able to use Tweetbot in the same way that I used to — push notifications for likes, retweets, follows, and the like are no longer functional.

The folks behind Twitterrific have been encouraging users to enable notifications in the official Twitter app and to launch Twitterrific whenever they just want to browse their timeline. This isn’t a terrible solution, but I’d rather interact with the Twitter app as little as possible. That left me to revert back to the original third-party Twitter client — SMS.

Surprisingly, the good old 40404 shortcode continues to work. And although the increased character count causes some occasional truncation, its still a better experience then launching the Twitter app, which I find to be an abhorrent piece of software. The setup is quite simple, assuming you already have your phone number associated with your Twitter account. Just enable the notifications you want to receive from the mobile settings page on Twitter.com, which is only visible on the desktop version of the site. 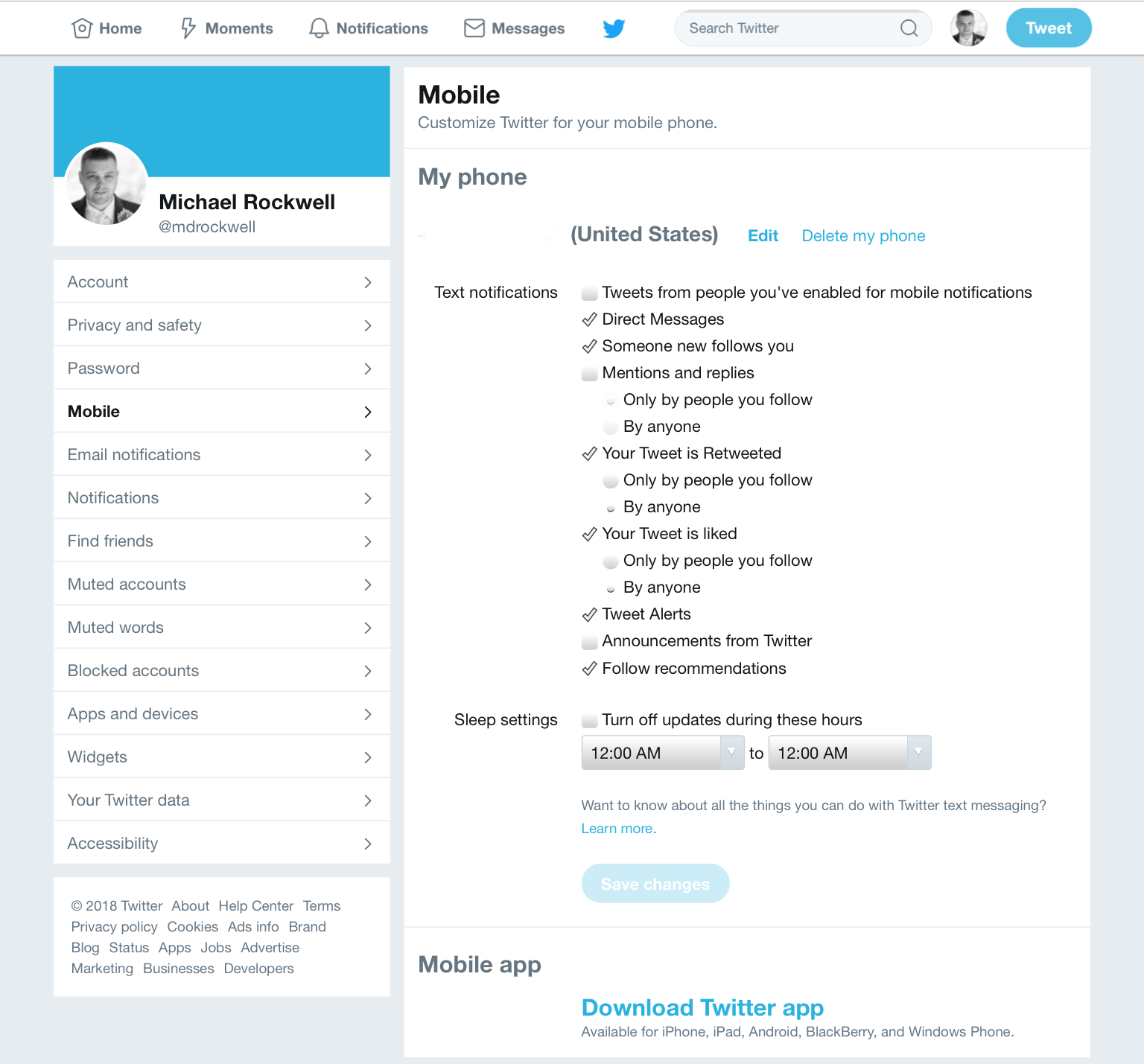 I have it set to send me an SMS message whenever I receive a direct message, someone follows me, and when a tweet is liked or retweeted. I’m still using Tweetbot’s notifications for mentions and replies. It’s a bummer that they’re a little delayed compared to the official Twitter client or SMS, but I frequently interact with these notifications and I’d rather them launch my preferred Twitter client when tapped.

It’s also notable that I’ve added the 40404 shortcode to my contacts, added Twitter’s logo, and changed its text message tone to iOS’ built-in Tweet sound. It may sound silly, but it does add quite a lot to the experience.

This setup gives me all of the notifications I’m accustomed to, but there’s still the matter of Tweetbot’s activity panel, which was also removed when the API changed. I always kept the Activity panel open next to my timeline on iPad because it helped reduce the line length of tweets and gave me something nice to glance at in the sidebar. 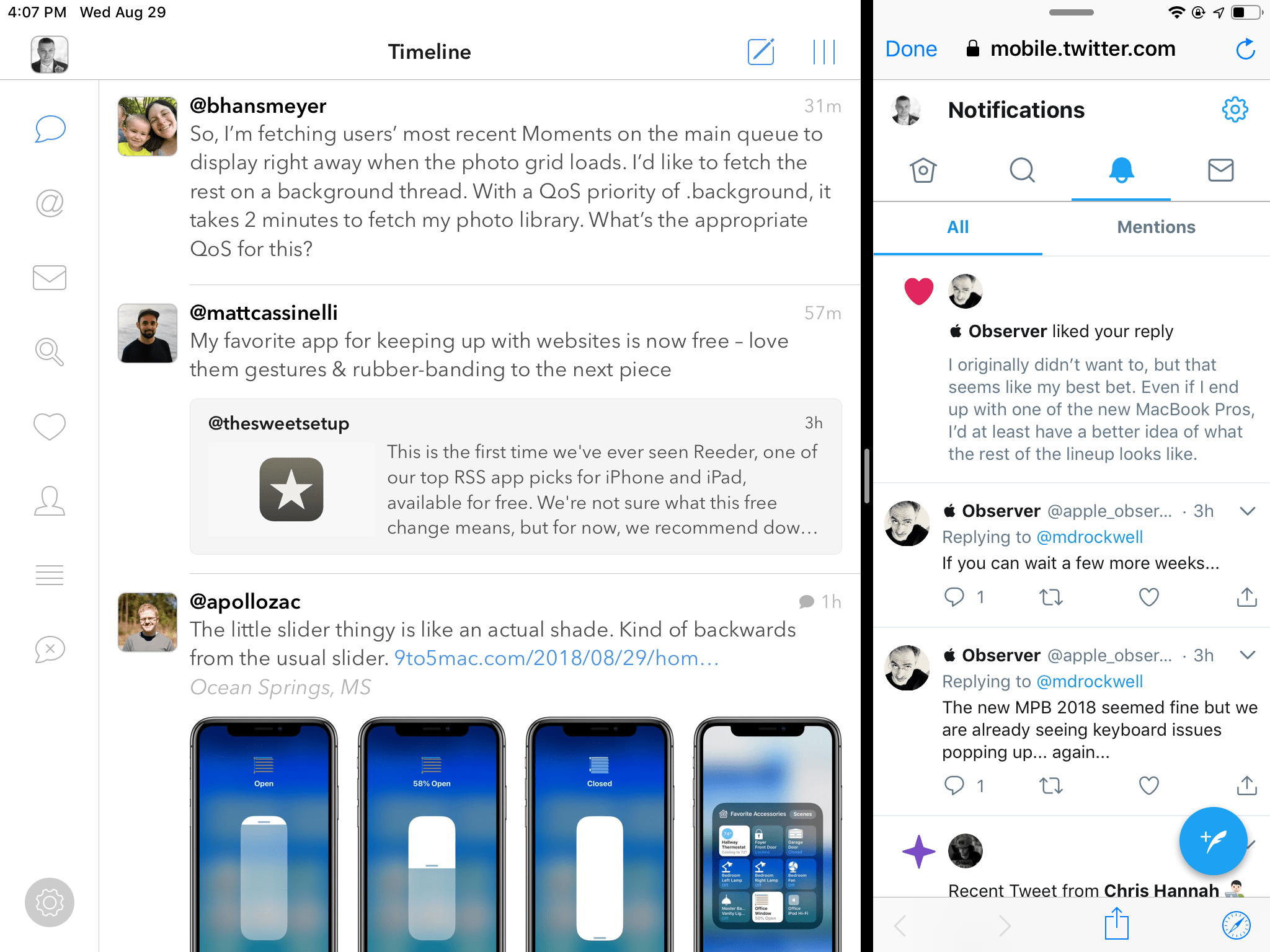 The solution I’ve come to utilizes Sidefari in Split View to display the notification tab on Twitter’s mobile site. This gives me all of the glanceable data I’m used to and forces Tweetbot’s timeline to have sensible line length. I’ll occasionally be prompted to sign back into Twitter in Sidefari, but its a small price to pay in order to continue using the best Twitter client ever made.

A neat little iPad app that uses iOS 9’s Safari View Controller and Slide Over to easily display two webpages at once. This has already made drastic changes to my Linked List-writing workflow — the process feels much more natural now. And I no longer need to keep jumping between tabs for references or to copy and paste author names and quotes.