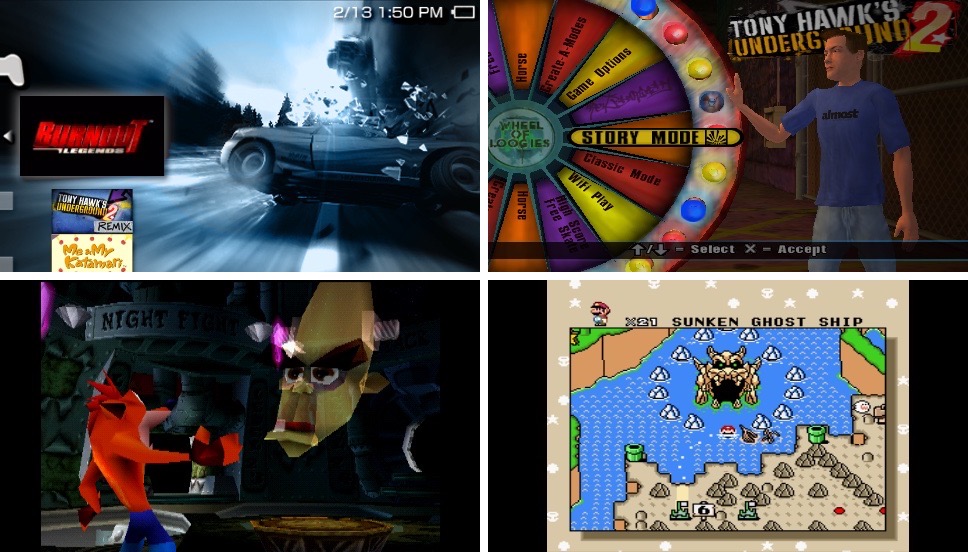 After tinkering around with Nintendo DS flash cartridges, I decided to upgrade my handheld gaming setup with a PlayStation Portable (PSP). This is a console that passed me by during its run. It was released at the tail end of high school for me when I had moved on to mostly PC gaming. I had a friend with one, but never spent any time on it myself.

What drew me to the PSP, though, was how easy it is to install custom firmware and readily available, inexpensive microSD to Memory Stick PRO Duo adapters. The PSP isn’t particularly great at dealing with high storage capacities — as far as I can tell, 128GB is the maximum — and it can sometimes take several seconds to load the game, video, or music list when there’s a lot of items on your card. But it’s worth it to have so much content available on the system at any given time.

Once I got the custom firmware installed, which only takes about five or ten minutes, I was able to start loading it up with games, emulators, video, music, and plugins to customize the experience.

I’ve only just scratched the surface of the plugins that are available, but what I have at the moment feels like it fills all the gaps I had with the system. I’m currently using the following:

As far as video and music is concerned, I mostly added those to test it out. But I’ll probably keep some amount loaded on it. The media doesn’t take up too much storage space and it can be used as a good fallback if there was ever a scenario where I wanted to preserve battery life on my iPhone away from a charger. Or, when paired with an HDMI adapter, the PSP might become my go-to entertainment device in hotel rooms when traveling — rather than tying up my iPhone or iPad for that role.

The PSP supports a pretty good range of audio formats, so you could probably drop whatever you have on it and it’ll work without any trouble. But for the sake of consistency, I converted a handful of albums to 256kbps MP3 using MP3 Encoder.

Video is a bit more tricky. I used Handbrake for the heavy lifting, but the old preset that used to be built-in to the app is no more. I downloaded an older version of Handbrake, which still included it. But after importing that preset into the latest version of Handbrake, the resulting videos wouldn’t play on my PSP. I had to craft my own preset after some research online, which seems to do the trick with everything I’ve thrown at it so far.

Unlike the Nintendo DS, the PSP is actually quite good at emulating older systems. I’ve been playing through Super Mario World over the past few days and played through a bit of Rocket Knight Adventures, too. Aside from a couple of graphical glitches on the Super Nintendo emulator, everything’s run smoothly.

There’s a sea of emulators available, but I have the following installed, which seem to be the best of the bunch and support the systems I’m actually interested in emulating:

The Nintendo 64 emulation is pretty rough — most games don’t seem to work at all. But it does okay with Super Mario 64 and some other popular Nintendo-made games that I plan to play at some point.

I’ve only found a single homebrew utility that’s worth keeping on my system, though. PSP Filer, which is a file management application. I’ve used it a little bit for moving and deleting files, but it’s primary utility for me is to change the timestamp on games. The PSP doesn’t have any mechanism for sorting games, it simply displays them in the order they were added to the system. With PSP Filer, you can change those timestamps to sort your games however you’d like.

I was initially planning to sort games alphabetically, but that is a lot of work to do by hand. So instead I’ve settled into just keeping the games I’ve been playing recently at the top of their respective category list. That helps keep them easy to find and quick to launch.

One of the greatest features of the PSP is it’s ability to run PlayStation games — as long as it’s packaged as an eboot, the PSP can run it. I’ve already reached 100% in Crash Bandicoot 2: Cortex Strikes Back and started Crash Team Racing, but I plan to play through Spyro the Dragon next.

The real star of the show, though, is the PSP games. They show what the system is capable of and there’s a huge library of games that I’ve never played before. I’m most excited about these:

I’ve had a ton of fun on the PSP over the past few weeks and I hope I’m able to enjoy the system for quite some time without losing interest. Between emulation, homebrew, PlayStation, and games developed specifically for the system, there is a massive library available. It feels like a handheld version of one of my favorite consoles of all time — the PlayStation 2 — and that’s high praise.

If you have a PSP bouncing around in a drawer somewhere, it might be worth digging it out, installing custom firmware, and enjoying one of the greatest handheld gaming systems of all time.