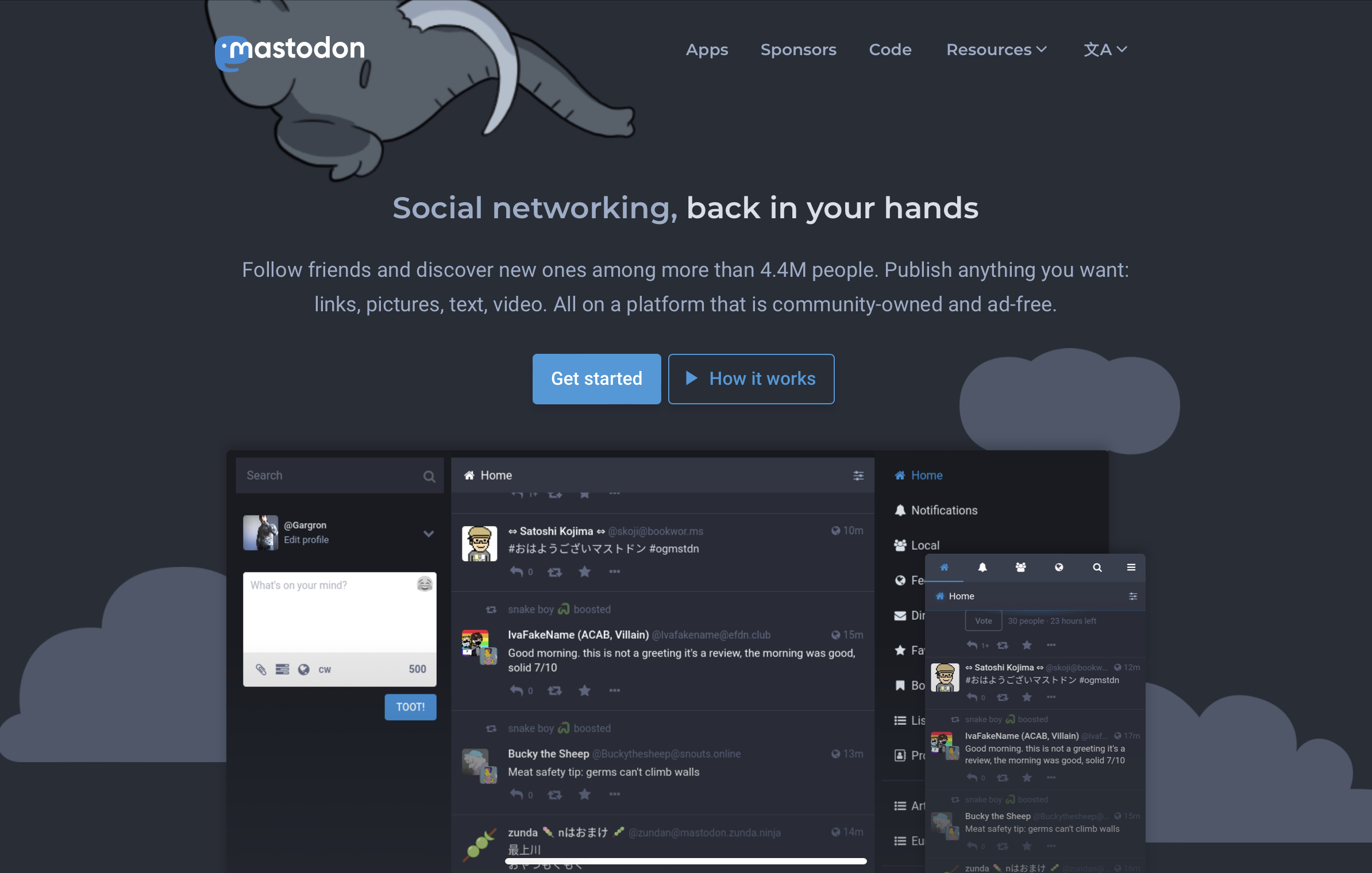 Mastodon is open source, distributed social networking software. It’s most similar to Twitter in terms of core functionality, but what sets it apart is the ability to setup your own instance or join one that fits your interests. Mastodon takes advantage of ActivityPub, allowing users on the service to follow others from separate instances.

And because ActivityPub isn’t Mastodon-specific, you can follow users from instances that aren’t even built on Mastodon. It’s compatible with Pixelfed, PeerTube, Pleroma, and more — as long as it uses ActivityPub, you can follow it through Mastodon, at least in my experience.

My first exposure to Mastodon was in 2018, but it was short-lived. I made the mistake of trying to rebuild the same social graph I had on Twitter and no one stuck around for very long — including me. It wasn’t until I started exploring Twitter alternatives earlier this year that I started using Mastodon as my primary social network.

I could have just revived my account on Mastodon.social, but one of the biggest draws for me was the ability to have my own instance. I setup LibertyNode.net in July, invited my wife and sister-in-law to join, and haven’t looked back.

If you’re interested in giving Mastodon a go, you could join one of the bigger instances like Mastodon.social or Mastodon.online. Alternatively, you could use Instances.social to try and find one that’s focused more on your interests.

Once you have an account, you’ll probably want some cool people to follow. Your instance’s profile directory as well as the local and federated feeds are a good place to start. Just keep in mind, because of the open source nature of the software and the ability for anyone to setup an instance, just like the web in general, there is some degree of unsavoriness. A good instance will be moderated regularly to prevent the most egregious content, but just a fair warning that some could slip through.

In terms of specific people to follow, though, I’d be more than happy to have you as a follower — you can find my personal account at @mike@libertynode.net and Initial Charge’s account at @initialcharge@libertynode.net. And here are some of the people I’ve especially enjoyed on Mastodon recently:

You shouldn’t feel stuck just following people that are native to ActivityPub, though. BirdsiteLive is self-host-able bridge between Twitter and Mastodon. I use this for a couple dozen people or so that don’t yet have a presence on an ActivityPub-compatible service.

You can use the main BirdsiteLive instance, but I would recommend looking for other, smaller instances that aren’t quite as saturated. Distributing your follows across multiple instances will help prevent Twitter from shutting it down through rate limiting or some other mechanism. 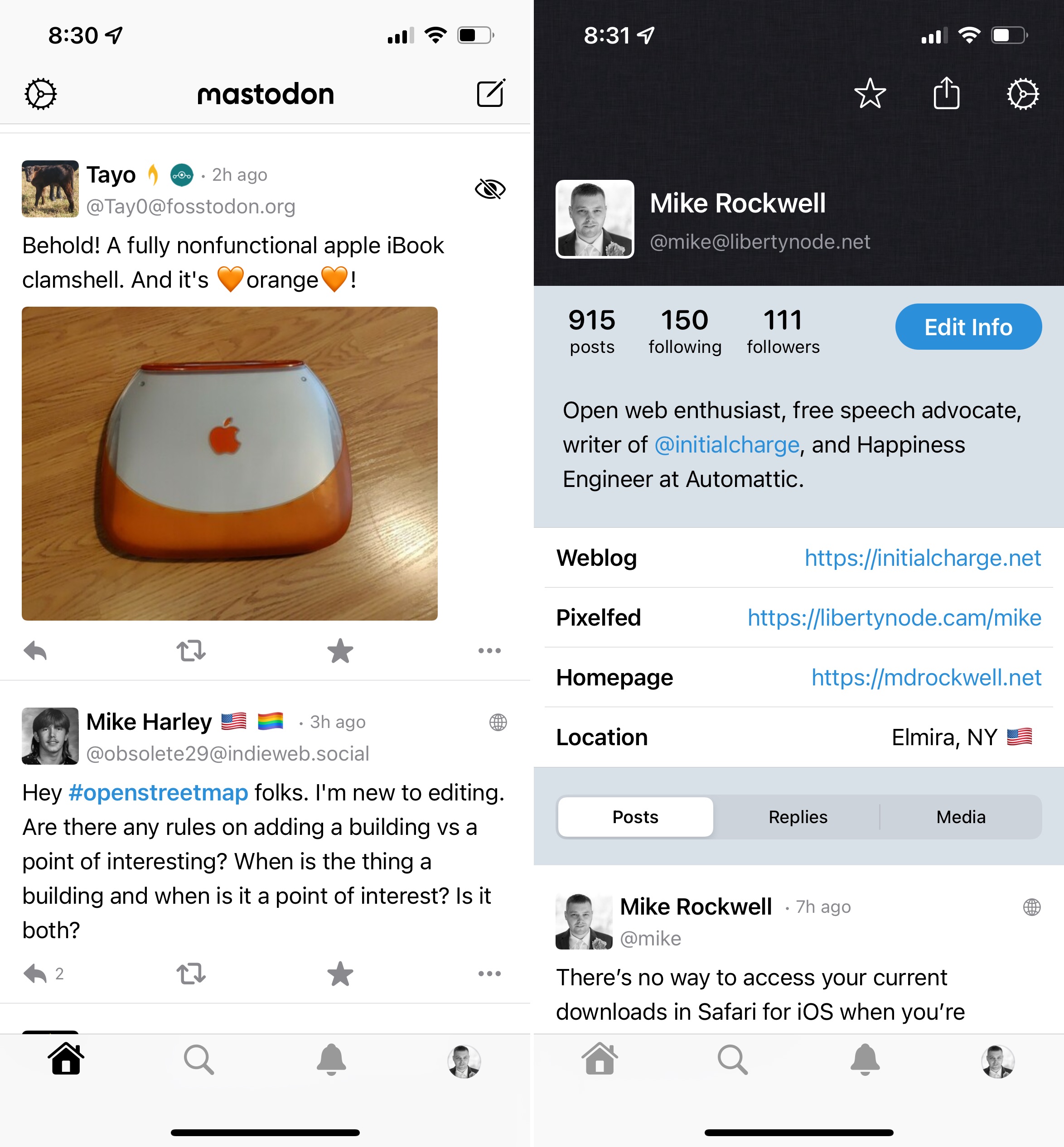 Beyond that, there are a handful of other tools I use that interact with Mastodon:

As it stands now, there is some political polarization on the Mastodon and that may get worse if the upcoming Truth Social decides to federate. But that same polarization exists in many other aspects of our lives now, so it isn’t a unique problem. However, unlike other social networks, the distributed nature of Mastodon could help to prevent some of the more toxic behavior that the polarization leads to on Twitter, Facebook, and others.

Each instance can have its own policies regarding moderation and can decide what instances to federate with or not. This allows communities to setup a firewall from the type of behavior that they would like to discourage. And if you don’t like one instance’s policies, you can find another instance or even setup your own. I used Cloudron on Linode to install and manage Mastodon, it was a pretty easy process.

I haven’t needed to do any instance blocking on mine yet, but there’s only a few of us on it and we’ve only been using it since July. I’m glad the option is there if I ever need it.

I’m quite bullish on Mastodon and ActivityPub in general. I think it’s the kind of software that churches, bands, and any other group should take into consideration if they want to establish a place to congregate online. And I very well may be doing some of this myself.

There isn’t an Apple-focused Mastodon instance that I’m aware of and having something like that might encourage some of my Twitter buddies to give it a try. I can’t say for certain whether I’ll set one up, but it’s on my radar. And if anyone out there is interested in collaborating on something like this, let me know.