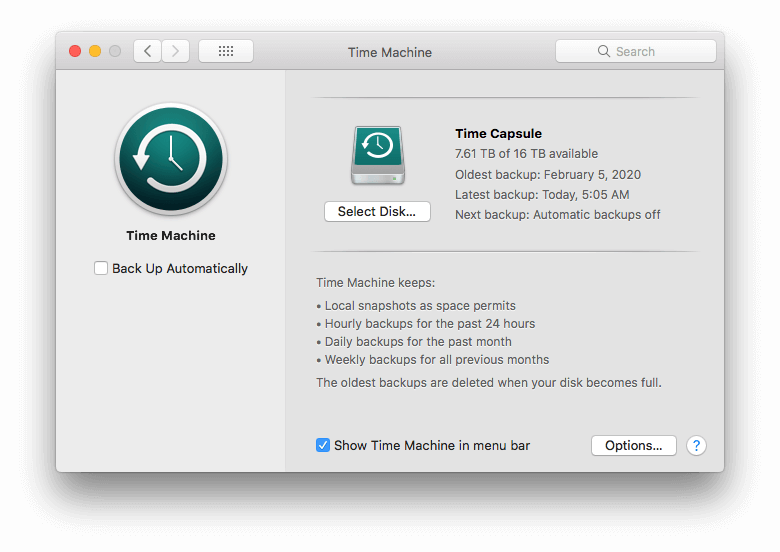 We all know backups are important, but they’re not as flashy and interesting as the next Apple Silicon Macs or nifty new piece of software. So they don’t really get discussed as often as they should. But in honor of World Backup Day, which I didn’t know existed and just happened to conveniently take place while I was already working on this piece, I thought I’d share my current backup strategy.

The Mac Mini shares the backup drives over the network as Time Machine destinations. And every Mac in the house backs up over Time Machine to these drives. So all of our local backups and media are stored in a single box — the ThunderBay.

We use TimeMachineEditor to have a bit more control over when our Time Machine backups take place. I have the Mac Mini setup to backup in the middle of the night and the MacBook Pro setup to backup at lunch time on weekdays.

The Mac Mini and my MacBook Pro are also setup with Backblaze to continuously backup all relevant data to the cloud. We will likely setup Backblaze on my wife’s MacBook Air too, but she only recently started using it again and we just finished the initial Time Machine backup.

I pay for a 2TB iCloud storage plan that is shared with my wife. Our iPhones and iPads all backup to iCloud nightly. We store all of our documents on the service too.

We don’t use iCloud Photo Library, though. Instead, we use Google Photos — the primary reason being their excellent Partner Sharing feature. The feature automatically shares each photo and video to each other’s library. This means we don’t have to worry about who took a given picture or where the full version is stored — we both have access to all of the.

And seriously, Apple, get that feature figured out so I don’t have to maintain an additional service.

But Google Photos doesn’t give us the option to store local copies on the Mac, so a few times each year we manually backup photos from our iPhones and iPads to the Mac Mini server using the Photos app.

So every single photo we take and video we record is stored in six locations — the original device, Google Photos, the iCloud device backup, the Mac Mini’s media drive, backup drive, and Backblaze. It might seem like overkill, but our family photo library is almost certainly the most important data that we have and I’d rather be safe than sorry.

The pillars of my backup strategy are Time Machine, Backblaze, iCloud, and Google Photos. As I mentioned above, it would be nice if Apple finally introduced a solution for family photo libraries. Then we could eliminate Google Photos from our setup and we’d no longer need to manually backup photos to the Mac Mini, since the Photos app offers the option to store full size local copies of everything in your iCloud Photo Library.

But in terms of locally stored backups, I’m pretty happy with the setup. Since everything is stored inside the OWC ThunderBay 6, if there was ever an emergency, I could grab my iPhone and the ThunderBay. Those two items contain all of the important data in my life.