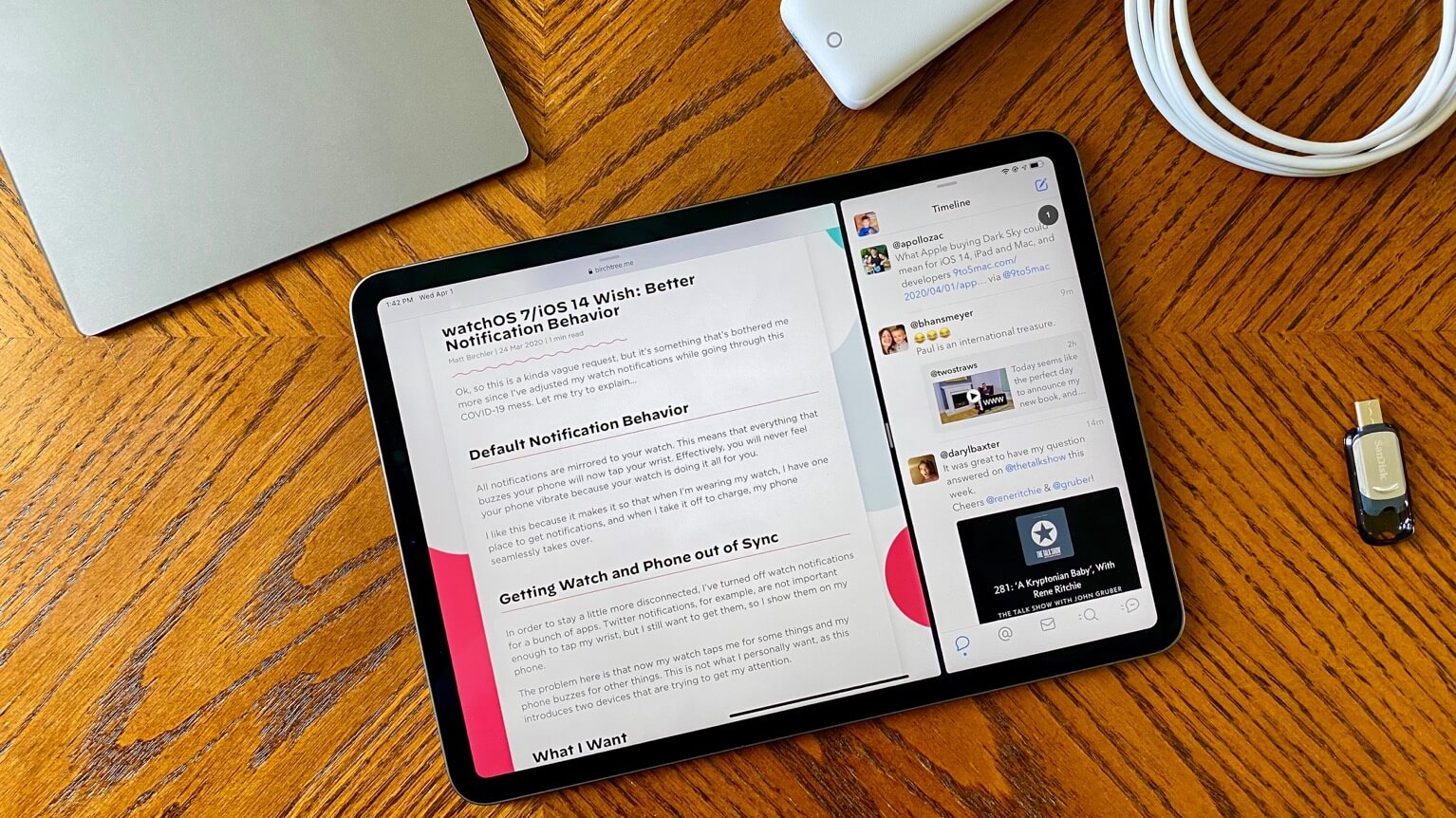 I’ve been waiting for a new iPad release since last fall. The iPad Air 2 that I’ve been using as my primary computer since early 2015 was starting show its age. Bluetooth was becoming less reliable, the system itself felt sluggish, and battery life was getting pretty poor. It had served me well over the past five years, but I was very happy to retire it in favor of the newly released iPad Pro.

The announcement of the iPad Pro wasn’t exactly a surprise, it had been rumored for a few months at least. But with the state of the world at the moment, it wasn’t obvious exactly when or how Apple was going to actually end up announcing it. When I first saw the press release, I glanced through the product pages to get a feel for what it offered and then immediately placed my order.

I ended up with the 11-inch, 128GB, WiFi-only, space gray model. I haven’t spent more than 30 minutes with one of the larger, 12.9-inch Pros, but that was enough for me to know for sure that it wasn’t the right size for me. The vast majority of the time I’m using my iPad, it’s lounging out on the couch and I think the 12.9-inch size is better suited for iPad users that spend most of their time at a desk. Or perhaps artists that want a bit more canvas to work with. Given how I planned to use the iPad, the 11-inch was a natural choice for me.

As for the decision to go with the WiFi-only model. While I travel a few times each year for work, at the moment I don’t even plan to bring my iPad with me on these trips. I’m so busy doing my standard day-to-day tasks, working on in-person projects, and socializing in real life with my distributed teammates that I don’t really have time to use the iPad.

On my last work trip I brought my work laptop, iPad, iPhone, and Nintendo Switch. The Nintendo Switch never got powered on and I only ended up taking my iPad out once or twice. But I could have done everything from my iPhone, so I’ll be leaving my iPad at home from now on.

If that changes, though, tethering with my iPhone works just fine for connectivity when WiFi isn’t available. It’s not as slick as having the cellular networking built-in, but it doesn’t cost me a cent more to use and, in my experience, offers great speeds and reliability.

I was very happy to learn that Apple increased the base storage for the iPad Pro. The iPad Air 2 that I was coming from had 64GB of storage, which has been fine. But for the sake of future-proofing, having a bit of extra breathing room is a nice touch. I mean, I used the Air 2 for five years and I expect I’ll use this new iPad Pro for roughly the same amount of time. 64GB might be fine today, but I can’t say for certain that will be the case in 2025.

When the iPad actually arrived on March 25, the most striking difference between it and my previous iPad Air 2 was the lack of home button. I went through that transition on the iPhone side of things this past fall when I upgraded my iPhone 8 to an iPhone 11 Pro. So far, it has been smooth sailing. It only took me a day or two before using an iPad with a home button felt foreign to me.

I miss Touch ID quite a bit, though. It was relatively slow on my iPad Air 2, but it almost always worked. I keep my iPad in landscape mode and it was very comfortable to rest my right thumb on the home button whenever I unlocked the device. But on the iPad Pro, my left hand tends to obstruct the Face ID system. iPadOS notifies me with a handy little indicator, but it’s such a pain.

Do most iPad users actually use their device in portrait orientation? I suspect not and that means that the majority of iPad Pro users end up running into this “Camera covered” notice several times each day. I hope Apple eventually makes the switch to thinking about the iPad as a landscape-first device — rotating the logo on the back and moving the front-facing camera to one of the longer edges.

I’ve really enjoyed the Pro’s 11-inch display, when compared to the 9.7-inch display of the Air 2. It’s such a cozy size. The entire device is barely larger than the iPad Air 2, but still features this stunning display. Watching YouTube videos, viewing photos, and typing with the on-screen keyboard are a much better experience when you have more surface area to utilize. I haven’t found the increased refresh rate of the ProMotion display to be too impressive, though. I just don’t see the difference in normal use. Perhaps my eyes aren’t capable of perceiving that type of improvement.

Speaking of the on-screen keyboard, though. It was jarring at first to have those additional keys on the virtual keyboard. I found myself miss-typing because I’d sort-of lose myself on screen. It only took a day or two before it felt okay to me, but it was a weird couple of days. But I sure wish they didn’t include a caps lock key. I still haven’t hit that thing on purpose and in the extremely rare circumstances where I want it, isn’t double-tapping the shift key good enough?

The overall hardware aesthetics of the iPad Pro have been a pleasant change when compared to the iPad Air 2. I wasn’t too sure about the flat edges, with my primary concern being that it would be difficult to pick up off of a flat surface. But its no more difficult to pick up than the iPad Air 2 was. The benefit, though, is that its significantly easier to adjust the volume on the Pro because the buttons aren’t hidden from the front by the curvature of the device.

The camera bump is less than ideal. When laid flat, the device sits off-kilter and it has a bit of a wobble when tapping near the adjacent corners. But I’m very glad to have an improved camera available to me in this device. It isn’t quite as good as my iPhone 11 Pro — no telephoto lens — but it is close enough in most circumstances.

With a little one in the house, I take a lot of pictures now. And prior to the iPad Pro, I would have to reach for my iPhone whenever I wanted to take a photo. With the improved camera system, though, I can quickly take a snapshot regardless of what device I’m using and know that I’m going to get good results. This hasn’t occurred too frequently, but the peace of mind is worth it. Josh is only going to be a baby once and I don’t want to miss capturing any of these precious moments because my iPhone wasn’t within reach.

I’m ecstatic to have another device in my life that features USB-C. It lets me use the same power adapter with my iPad Pro as I do with my MacBook Air and means that most accessories I purchase for either can be utilized on both. This brings a couple of thoughts to the forefront, though:

And on the topic of connecting devices, Sidecar has become one of my favorite iPadOS features. It wasn’t available on my iPad Air 2, so I’ve only had the opportunity to use it with my iPad Pro. Over the past week, there have been numerous occasions where I’ve connected my iPad via Sidecar and threw Slack or a second browser window on my iPad. It’s just so darn handy to get a little bit of extra screen real estate when you need it.

But getting back to using the iPad directly, this thing is a screamer. It was a little disappointing to learn that the A12Z offered next to no improvements when compared to the previous iPad Pro’s chip, but most people that buy the new iPad Pro are going to be coming from a much older model. For me, the iPad Pro is about three times faster than the iPad Air 2 in single core tasks and over four times faster in multi-core tasks, based on Geekbench 5.

Here are the benchmark results for all my devices, averaged over two runs:

With the exception of my iPhone 11 Pro in single core performance, the iPad Pro is the fastest computer I own. By a lot. And it feels that way too. Everything on this device is so snappy that it has me wishing I could run Handbrake on it. Converting ripped Blu-ray discs would be a much nicer experience if I could run the app on my iPad Pro instead of one of my macOS devices.

I think the iPad Pro will serve me well as my primary computer for several years. It has more than enough horse power available, an excellent camera system, and a modern charging and accessory port. But Apple also announced a new keyboard for the iPad Pro, which features an integrated trackpad.

The upcoming Magic Keyboard with integrated trackpad will capitalize on the revamped pointer support added in iPadOS 13.4 and give users the opportunity to interact with their iPad like a traditional PC. I plan to purchase the accessory when it’s released, but I don’t think it will become my default interaction method.

Currently, I spend most of my time with my iPad on the couch, browsing the web, managing email, reading news, and occasionally publishing links here on Initial Charge — no physical keyboard, mouse, trackpad, cover, or case. None of that will change with the introduction of the Magic Keyboard. What will change is my setup during longer writing sessions.

When I sit down to write a longer piece for Initial Charge, I set my iPad in a Studio Neat Canopy and type on Apple’s wireless Magic Keyboard. This gives me a more comfortable typing experience for the longer stretches. But up until iPadOS 13.4, I would disconnect the hardware keyboard and edit the text using the virtual keyboard. This let me meander throughout the house while reading and gave me a more ergonomic way to move the insertion point for edits.

With iPadOS 13.4, I’ve started using the Magic Trackpad 2 while editing, which let me type the corrections on the physical keyboard without uncomfortably reaching for the screen to move the insertion point. It’s been nice. So when I purchase the Magic Keyboard with integrated trackpad, I’ll retire the Studio Neat Canopy, Magic Keyboard, and Magic Trackpad setup in favor of Apple’s new iPad Pro accessory.

But I’m a little unsure about the dual hinge nature of the Magic Keyboard for iPad Pro. Will it feel unstable? Was it given the second hinge for the sake of balance? Would the iPad be too top-heavy without it hovering over the keyboard? Will I be able to push the iPad back so that the silhouette  is more akin to a traditional laptop?

Those questions are still left unanswered for the time being. But I can say with certainty that the iPad Pro is an excellent computer. It’s the most powerful I’ve ever owned and runs the most exciting operating system on the planet alongside my favorite applications. If you’re looking to jump into Apple’s tablet offerings or have an iPad that’s starting to feel a bit dated, you won’t regret buying the iPad Pro.