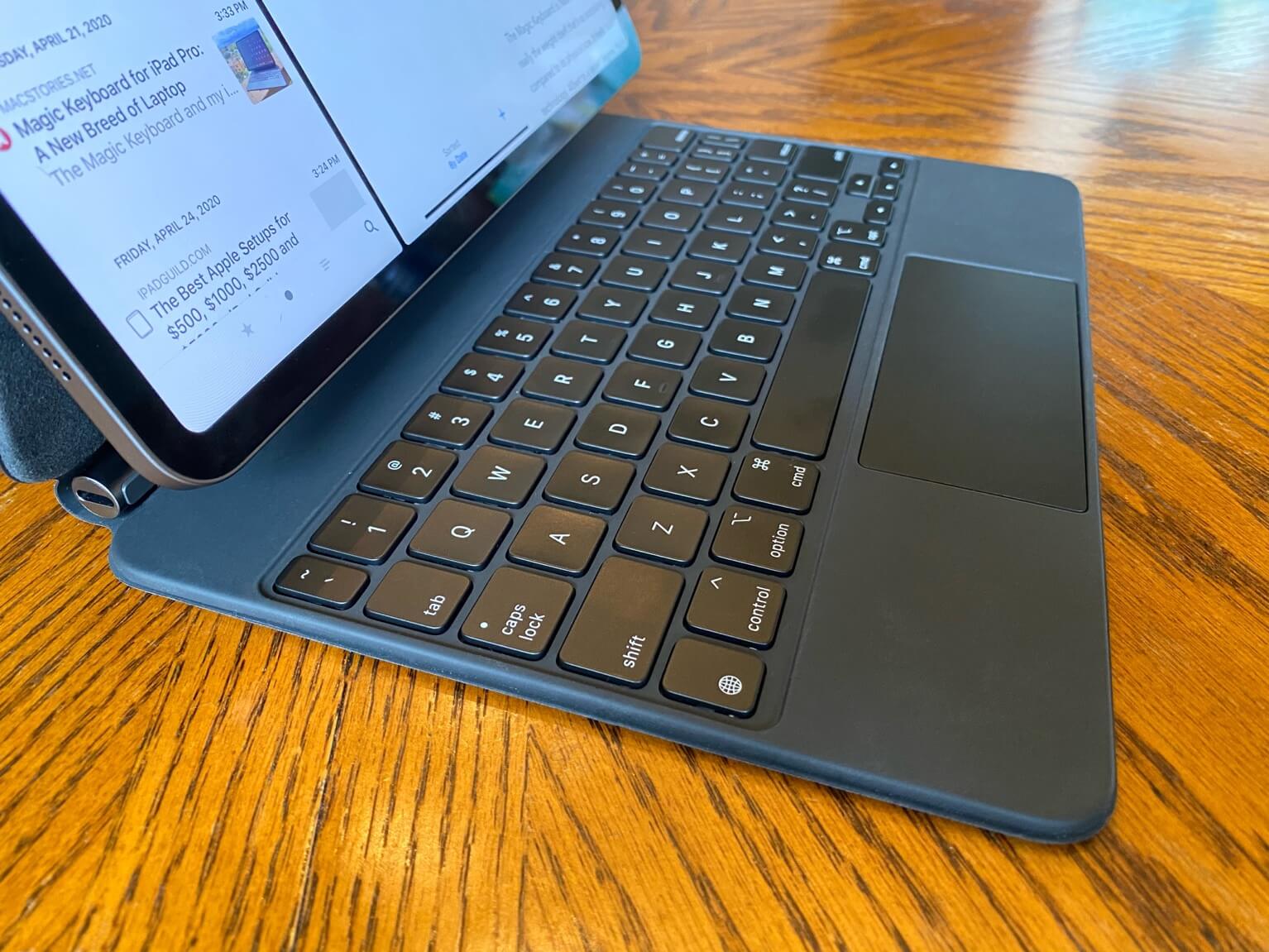 I ordered the Magic Keyboard for 11-inch iPad Pro just a few hours after pre-orders became available. I had a feeling that this was going to be a transformative accessory and based on the reactions I’ve seen online so far, that hunch was correct. Now that I’ve spent a few days with it, I can confirm it’s an incredible piece of tech, but I’m not quite sure its going to change the way I personally use my iPad.

When the package arrived, it was much heavier than I was expecting. Even after seeing reviews that noted its weight, I wasn’t really prepared for it. After just a few minutes with it unboxed, though, the term “heavy” was rapidly replaced with “dense”.

The Magic Keyboard is heavier than most of us expected, sure. But it’s not really the weight itself that’s so surprising, its the accessory’s weight compared to its physical size. It feels solid, like it’s absolutely packed with technology. Albeit to a lesser degree, this is a similar feeling to what I had when I purchased the first iPhone in 2007 — I just couldn’t believe how small it was with the features it offered.

The Magic Keyboard is filled to the brim with magnets, features a comfy little trackpad, a backlit keyboard, a nifty hinge that’s reminiscent of the iMac G4, and an extra USB-C port to boot. It doesn’t seem like Apple should have been able to get this much into such a small package. But they have and it’s delightful.

The magnets in the lid are very strong. To the point where I’m not worried at all about the iPad falling off when I don’t want it to. That does make it a bit tricky to remove the iPad, though. I tend to brace the keyboard with one hand and lift up on one of the bottom corners of the iPad itself with the other. It’s a bit too easy to have the iPad slip during this process, though. Often this causes the opposite corner of the iPad to bump against the keyboard, which isn’t ideal.

It’s definitely a trade-off, but I’d rather it be a little finicky to remove than have to worry about the iPad falling out unexpectedly. And I’d place this in the nit-pick category, for sure, it’s not like it’s that difficult to gracefully remove the iPad.

The backlit keyboard feels comfortable to type on, despite some of the keys being smaller than usual. I might have made slightly different decisions when designing the layout than Apple did, specifically the narrow hyphen key, but that’s mostly because of my own typing style — I almost certainly over use em-dashes.

It also would have been nice to see a function row with an escape key, but I don’t know how often I’d really use those. It’s omission is likely because of physical design limitations, though. If a function row was added, it would often be located uncomfortably far behind the bottom edge of the iPad. Since that’s the case, it’s probably better that Apple left it out.

The trackpad below the keyboard, is what many consider to be the star of the show. It’s the hardware feature that really sets the Magic Keyboard apart from what we’ve seen with the iPad previously. It functions exactly how you’d hope it to, giving you the ability to two-finger scroll, three-finger-swipe, tap to click, and all of the other nifty trackpad features that Apple added with iPadOS 13.4.

The physical size of the trackpad isn’t as generous as we’ve seen in Apple’s MacBook-line, but that’s because of the size limitation of the iPad itself. In the first few days with the accessory, I would mouse around with my middle or index finger and then attempt to click with my thumb. That’s my normal behavior on the MacBook Air and naturally have been trying to do so on the iPad too. But too frequently I would find myself missing the bottom edge of the trackpad entirely. I’ve since adjusting my hand positioning a bit, keeping my thumb a smidge closer to my mousing finger. I’ve also been more heavily relying on tap-to-click, which has worked just fine for me.

Coming from such a large trackpad on the MacBook Air, getting used to the trackpad in the Magic Keyboard has been an adjustment, but nothing that was insurmountable. And already I’m finding myself rarely running into these issues anymore.

The trackpad might be what sets the Magic Keyboard apart from the crowd, but the hinge system is makes the accessory’s design so striking. It’s clearly designed with weight distribution in mind. Allowing the iPad to float over the keyboard means that the entire package’s center of gravity is never too far back, which would cause it to tip over too easily.

With the two hinge system, I’ve never been concerned about the device tipping over. Even when tapping at the top corners of the display with the hinge pushed as far back as it can be — this thing isn’t going to tip over unless you really want it to. And that’s while allowing for a pretty comfortable range of motion. I’m sure there will be some users that are left wanting more — especially if they are a bit taller or frequently use their iPad at a standing desk. But for me, it’s just right.

I find my fingers bumping up against the bottom edge of the iPad while typing on occasion. Typically when I’m reaching for the hyphen or delete keys. I think I type with my hands a bit higher than most, though, so some owners might never run into that issue at all. It’s not exactly bad and it’s happening far less frequently than it did when the keyboard first arrived, so perhaps it’ll simply take a bit more time to adjust for. But if you keep your hands a bit high over your keyboard while typing, it might be something to keep in mind.

Built-in to the left side of the hinge is an additional USB-C port that can be used for charging. My buddy Matt Birchler did some testing and found that the port charges the iPad Pro at nearly the same speed as the iPad’s built-in port when using the stock charger. That was surprising to me — I presumed it would charge at a much slower rate, like half of the normal speed. But this is great news for iPad users that plan to use the Magic Keyboard full time.

Many iPad owners will find it useful to have an additional port available, so they can charge their device through the Magic Keyboard while another accessory is connected through the iPad Pro’s built-in port. But I’ve never actually connected anything other than a charging cable to my iPad. And I’m in the habit of charging my iPad each night, so charging the device while I use it is a rare sight. Maybe when the battery has aged a few years I’ll make use of it, but until then, it’s superfluous for me.

The Magic Keyboard’s base is quite rigid and feels like it was built to last. That combined with the excellent weight-distribution of the double hinge, means that the Magic Keyboard gives you a great typing experience on your lap too. I wrote the entirety of this review on the Magic Keyboard and much of that time was spent with it right on my lap.

It’s not exactly as comfortable to use on your lap as a MacBook is, but that’s sort-of to be expected. Given how much of the weight is located above the keyboard, though, I think Apple did an outstanding job engineering this thing to be useable on your lap. And that’s a huge leap forward compared to what we had available to us previously.

But the biggest surprise to me about the Magic Keyboard for iPad Pro and what has really shaped my thoughts about it overall is the fact that it made my iPad less inviting to use. For the first couple of days, I kept my iPad in it full time and found myself reaching for my iPhone when I typically would have been using the iPad. Perhaps because of the greater barrier to entry in opening the device with the keyboard attached — the magnets are strong and unlike MacBook’s there isn’t a cutout where you can easily open the hinge.

Or it could also be the indirect nature of interacting with the iPad through the keyboard and trackpad. It doesn’t lend itself well to touching the screen because of its mostly vertical position. And I really enjoy directly interacting with my apps through touch.

It also could have been the added weight, but whatever the specifics are, the Magic Keyboard has taught me that holding the iPad Pro in my hands is my favorite way to use the device by far. And anything that gets in the way of that tends to discourage me from actually using it.

Now that isn’t to say I don’t like the Magic Keyboard. Quite the opposite, actually — I love the Magic Keyboard. It’s my favorite accessory for the device. But for me, it isn’t something I plan to keep my iPad in permanently. The vast majority of the time, I’m going to continue using my iPad Pro exactly how I was before — setting it in Twelve South’s Compass Pro to watch videos, holding it in my hands on the couch to browse the web, tapping away on the screen to compose tweets and shorter links here on Initial Charge, and so on.

The Magic Keyboard plays an important role for me — it will become my default keyboard for the iPad Pro. Instead of getting out my Canopy by Studio Neat when I want to type for long stretches, I’ll grab Apple’s Magic Keyboard instead. This will let me enjoy the benefits of the integrated trackpad, physical keyboard, and its comfortable lap-top usage when I need it. And when I’m done writing, I can detach the iPad and use it as I always have — re-establishing the inviting nature of the platform that I’ve grown so fond of.

Is that worth the $299 price tag? It is for me. But I spent about half that on Apple’s standard Magic Keyboard alongside a Canopy. And I bought those specifically for the iPad — it’s not like I had the keyboard laying around and bought the Canopy to use with it. So I’m not above spending a bit too much money on accessories for my devices.

Considering what the Magic Keyboard for iPad Pro brings to the table, I think it’s worth it. Especially if you care a lot about the typing experience and want something that offers unmatched integration with the iPad Pro and iPadOS. It’s a slick piece of tech that every iPad Pro owner should, at the very least, consider adding to their kit.