Having a little one at home means that I’ve found myself more frequently listening to YouTube videos. Throughout the day, I’ll check my subscriptions and my recommended videos, save them to my watch later list, and then listen to them with my AirPods as I rock Josh to sleep for his nap. I pay for YouTube Premium, so I’m able to play videos in the background, but I thought I could do better.

There’s just so many videos on YouTube that don’t really need the video component. Whether they be information videos or talk shows, often times you can get by without the visuals. For those videos, the YouTube app is a bit heavier than what is necessary for listening. Something like Overcast with its Smart Speed feature, is a much better solution. Smart Speed strips silences from the audio, essentially skipping the pauses within a conversation. This allows you to listen to a podcast episode or uploaded audio file in less time, without having the distortion that comes from increasing the speed in the traditional sense. 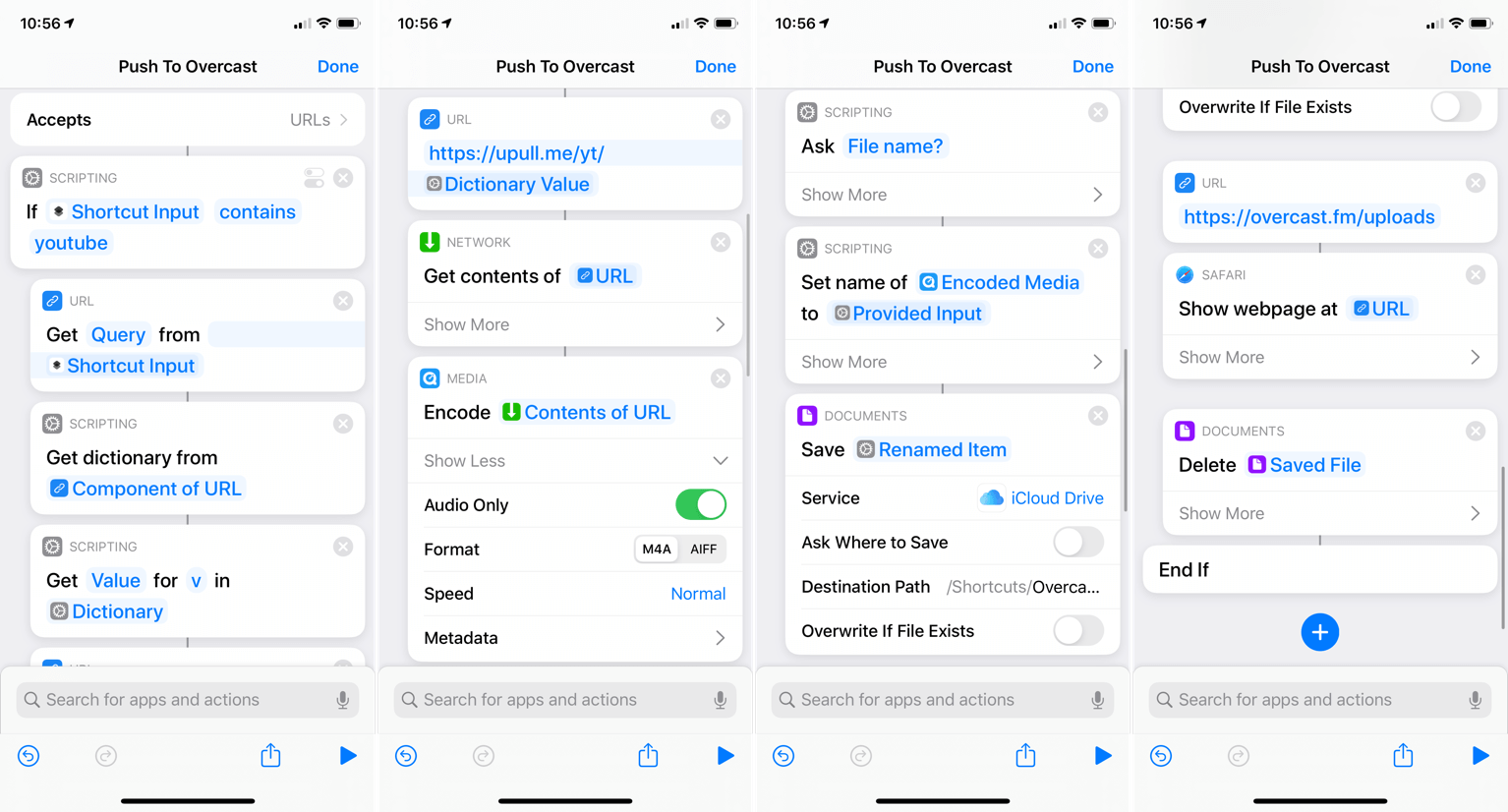 So I put together a shortcut — Push To Overcast — that lets me download a video from YouTube, convert it to an audio file, and then easily upload it to Overcast.

This does require an Overcast Premium account, which gives you the ability to upload audio files through the website and then listen to the file through the app. It’s not the most elegant solution in the world — just a bit more work moving the file around than I’d prefer. Other podcast clients have the ability to sideload audio files from the Files app or import YouTube videos from Safari. But Overcast is a much better podcast client overall, so I’m willing to put up with this little annoyance.

The shortcut utilizes UPull.me to download the YouTube videos. I don’t know too much about the site or who built it, but it’s the best method I’ve found for downloading videos from YouTube. Every other method I’ve tried has failed with some videos and I’ve never really understood why. UPull.me has worked with everything I’ve thrown at it, though.

Before using the shortcut, you’ll need to add a folder named “Overcast” to the Shortcuts folder of your iCloud Drive. That folder will be used to temporarily store the audio file while uploading.

After initiating the shortcut from the share sheet, the video is downloaded, it’s converted to an audio file, Shortcuts asks you to rename it, and it’s saved to /Shortcuts/Overcast/ — the folder you created above. From there, the shortcut opens the Overcast webpage where you can initiate the upload. After it completes, you tap the “Done” button and the shortcut will automatically delete the file for you.

Here’s a quick little video demo showing how it works:

You can add Push To Overcast to Shortcuts and use it as is or you can make your own modifications and make it work exactly how you want it to. And if you have any ideas for how to improve it, I’d love to hear about them — you can reach out to me with any thoughts you have.

Update 2/20/20: Xipeng Li reached out on Twitter with an updated version of the shortcut. His version grabs the name from the YouTube video and automatically populates it in the file name prompt. I didn’t realize that you could use the “Get Name” action on the contents of a URL. I made a slight change to the formatting of the name prompt that he added — I preferred to omit the “YouTube -“ that he added. If you’d like to use his version, you can find it at the link above or you can download my latest version from here.

Update 7/15/20: Upull.me has made some changes to their APIs that broke the previous version of the shortcut. So I’ve updated the link to a new version that should function again.