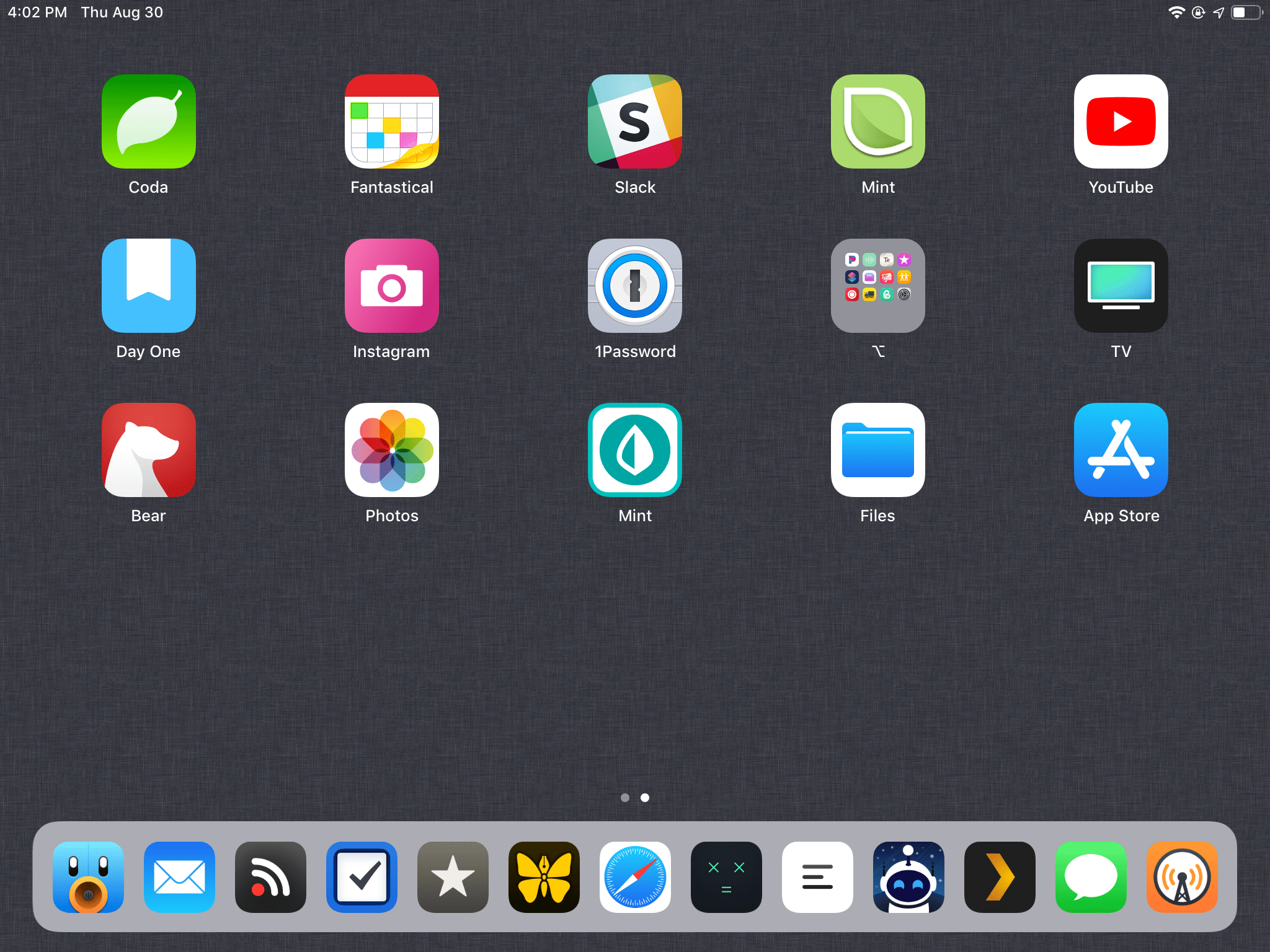 I’ve removed some lesser-used icons from my iPad home screen this month. Screens, Transmit, and Pages have all moved into my ⌥ folder and have been replaced by 1Password, Files, and the TV app. I’ve been using 1Password a lot more lately as I’ve been preparing for a new career opportunity, which I’ll hopefully be sharing more information on soon.

I’ve found myself reaching for the TV app more frequently lately, specifically while I’m eating lunch. As the summer comes to its end, my wife and I have been doing more in the evenings and I’ve had to keep up with my shows during my lunch breaks. My use of Transmit has also decreased recently as my usage of the Files app has picked up.

You might also notice that I’ve changed my custom Instagram icon to one of the default glyphs included in Workflow/Shortcuts. The old icon was just feeling a bit tired to me and thought it was time to change things up a bit. Eagle-eyed readers might have spotted the Toggl icon inside of my ⌥ folder. It’s not the native app, but instead another one of my fancy web shortcuts. I’m going to be tracking my time more often over the next several weeks and Toggl appears to be the best service for the job. 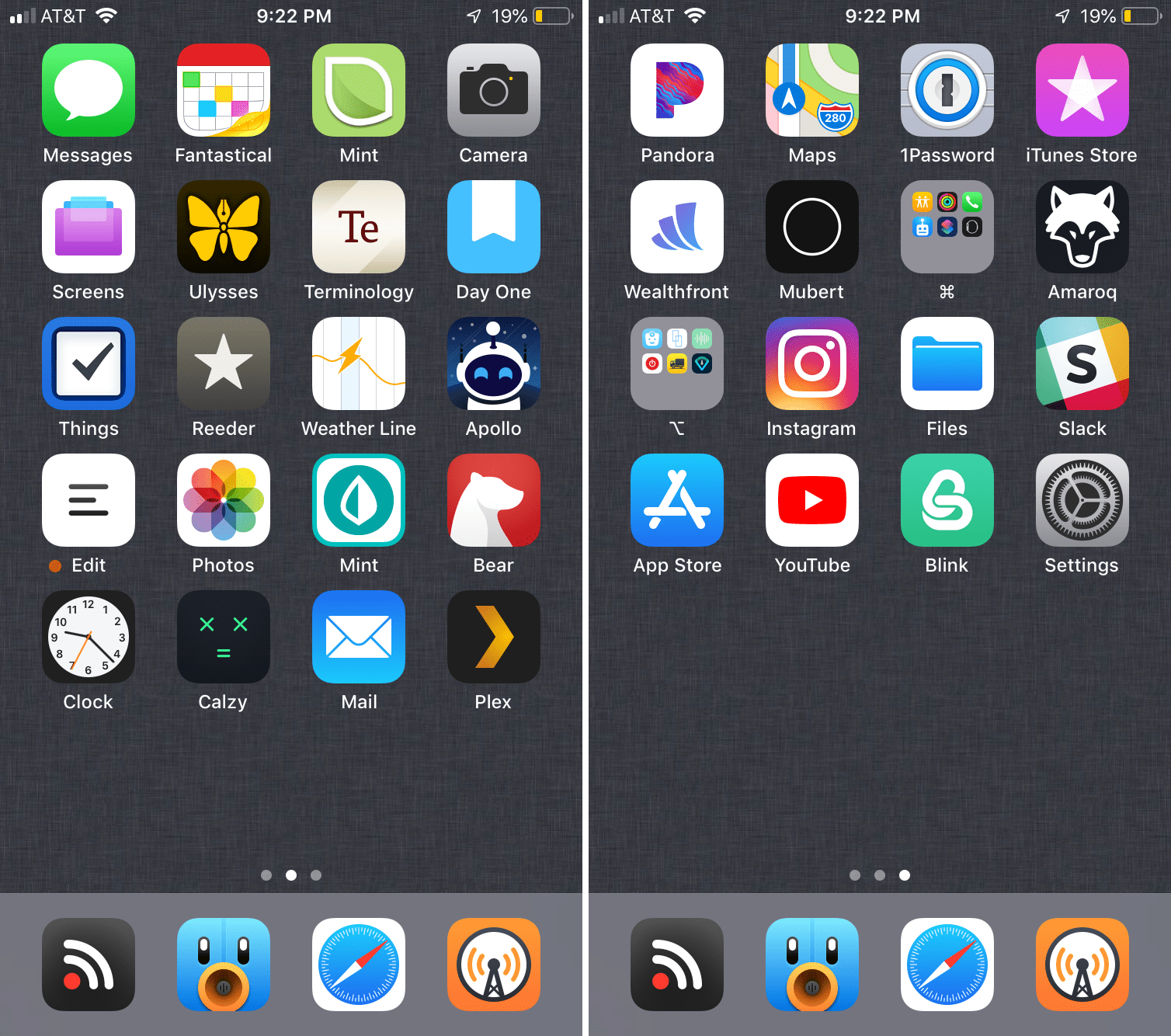 My experiment with Halide and Darkroom has ended. They’re great apps and perhaps I’ll return to them in the future, but I prefer the simplicity, speed, and reliability of shooting and editing with iOS’ default apps. Camera and Photos don’t have as many pro-level features and that’s okay. They get the job done just fine.

In a similar move toward the system’s default apps, I’ve switched from Newton to Mail for my email client of choice. The folks behind Newton will be retiring the app and service in late September and I figured it was better to just switch now. It’s been a long time since I gave Mail a chance and that was foolish, the app is much better than I remember it being. It’s fast, reliable, and it doesn’t automatically create a bunch of folders on your server to support features you aren’t going to use.

I’ve moved Video Games by iCollect into my ⌘ folder, given how infrequently I’ve launched it lately, and I’ve installed Amaroq and Mubert.

Like many others, I’ve been experimenting with the Mastodon platform lately and Amaroq is the best client I’ve found for the service. Unfortunately, it doesn’t save your scroll position, offer timeline sync, or have support for iPad. But the app is rock-solid-reliable and has the best visual design out of the clients I’ve tested. If you’d like to find me on the service I’m @mdrockwell@mastodon.social.

Mubert is an app I actually found in a screenshot of someone’s home screen. I can’t for the life of me remember who it was, though. Nevertheless, Mubert plays algorithmically generated music to help you focus. It has four primary stations — Study, Work, Relax, and Active — as well as a number of different genre stations. I’ve been listening to Mubert a lot while I’ve been writing and it certainly seems like it’s helped, a lot. The music is endless, seamlessly transitioning to different beats and rhythms as it plays. If you need a boost in productivity, I suggest giving the app a try. 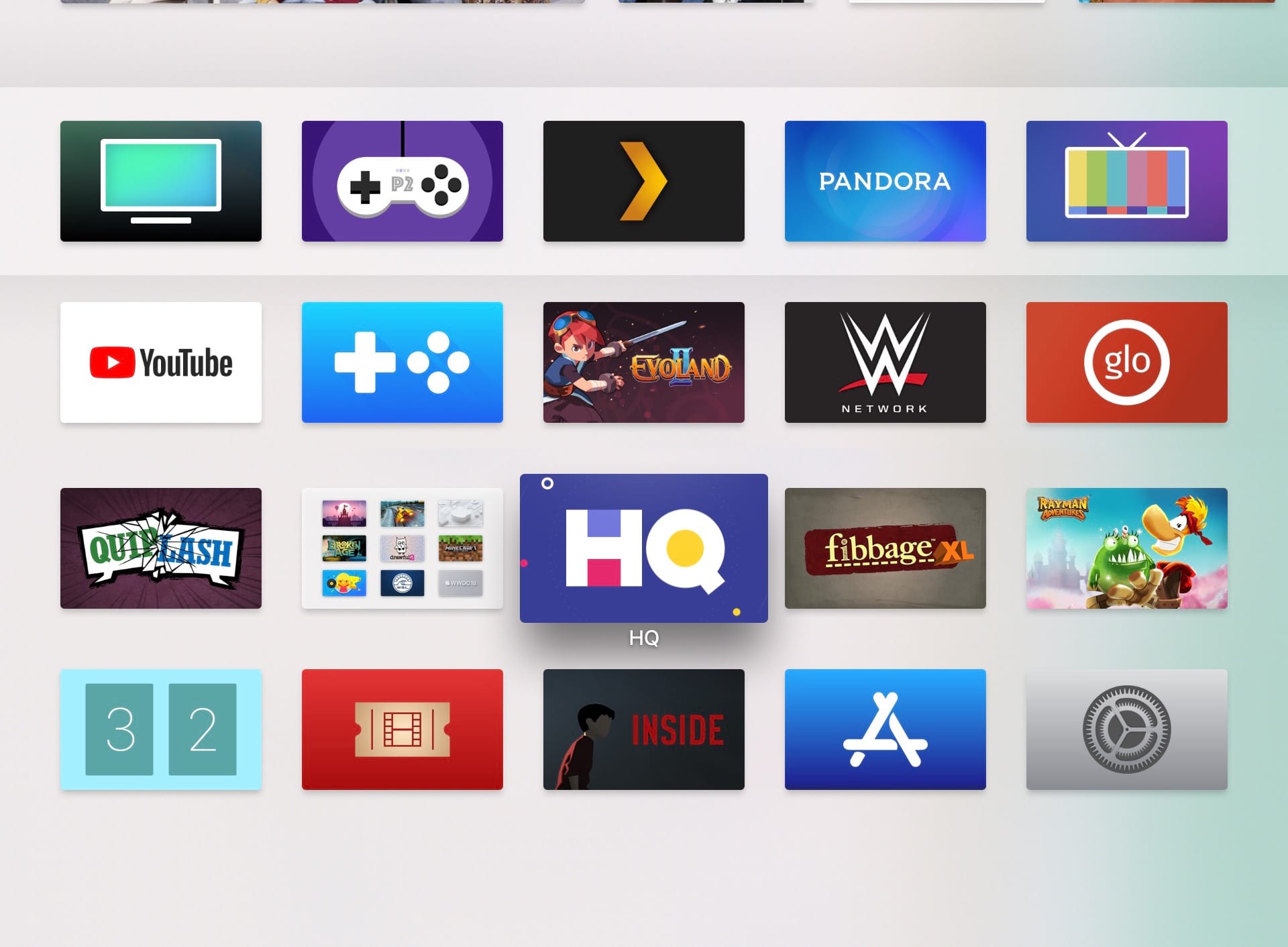 I’ve installed HQ Trivia, which is a live game show app that lets players compete with thousands of others for cash prizes. I had heard about it long ago, but it took the Apple TV app for me to actually try it out. At the time of this writing, I’ve only participated in one game, but I expect I’ll continue to pop in when I’m able to.

Scoreboard, an app that was once on my home screen, has made a return. My wife and I have been playing more board and card games in the living room lately and this app has been a great way for us to keep score. 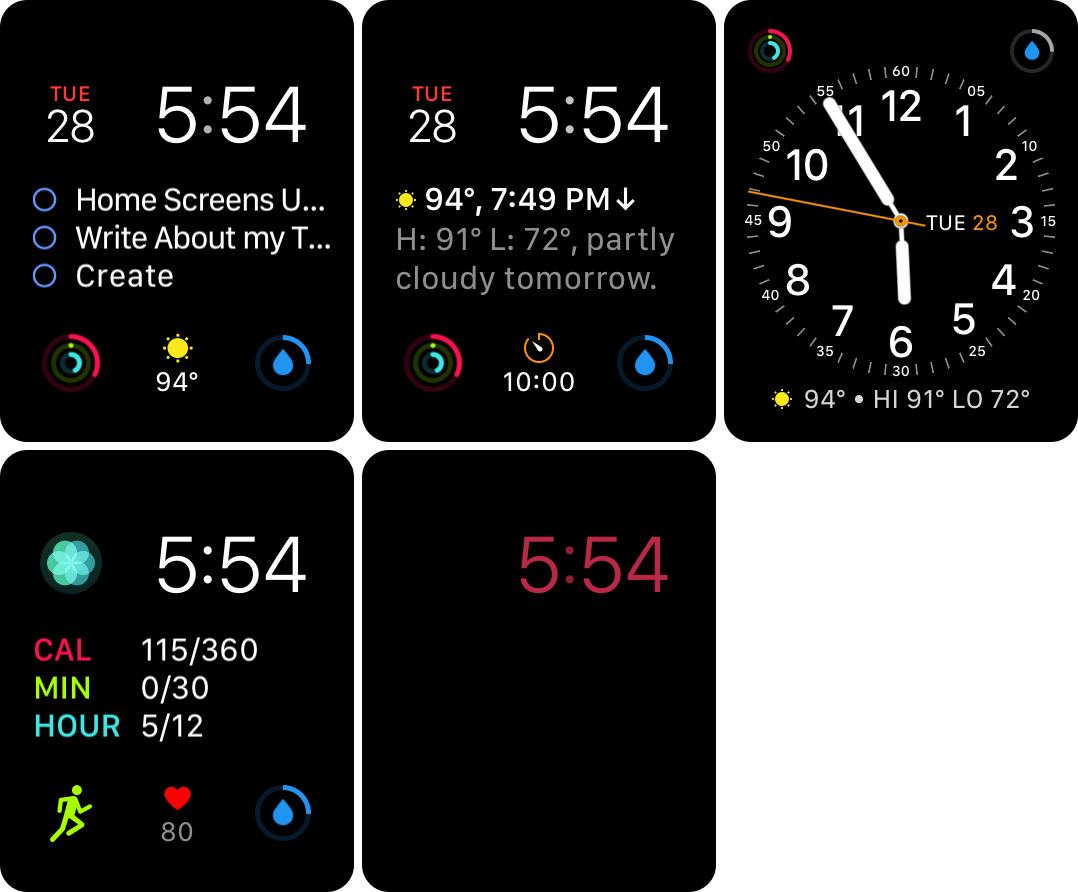 I’ve given up on the Siri watch face for now. I’ve barely used it over the past month and I don’t expect that to change unless third-party developers add a lot more to the experience. Aside from some minor color adjustments, the only other notable change from last month’s setup is my fitness watch face.

My fitness face is now built on Modular instead of the Activity Digital that I had previously used. The longer I own and use an Apple Watch, the more I realize that Modular is the best and most versatile Watch face on the platform. I have it setup with the following complications:

This just leaves a few apps that I still want quick access to, but don’t have the room for in my current complication setup. I have Vekt, PCalc, and 1Password in my Watch’s Dock. And shoutout to the Apple developer that came up with the Now Playing indicator on watchOS 5, I’m glad I don’t have to keep that in my Dock anymore.