Edit is a brilliant new writing app from K.Q. Dreger that’s the very definition of doing one thing well. It’s a place to write short-term notes, draft email replies, compose articles, or jot down bits of text. I’ve been using it for just over a week and it’s already earned a permanent spot on my first home screen. 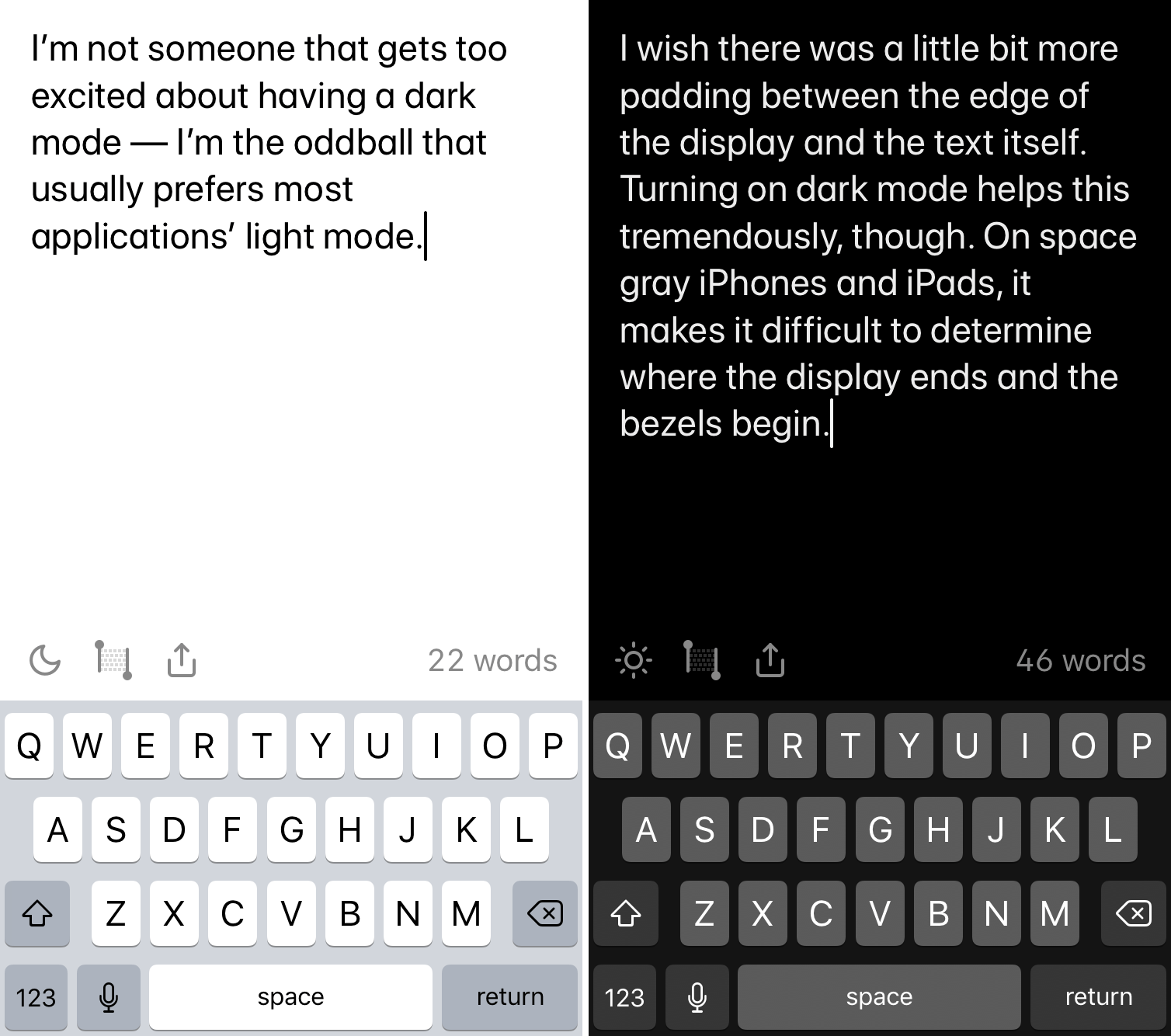 In the bottom left, there’s a dark mode toggle, a select-all shortcut, and a share button. I’m not someone that gets too excited about having a dark mode — I’m the oddball that usually prefers most applications’ light mode. But the dark mode hides my first complaint about the application — text sits too close to the top of the screen.

It’s an incredibly minor complaint, of course, but I wish there was a little bit more padding between the edge of the display and the text itself. Turning on dark mode helps this tremendously, though. On space gray iPhones and iPads, it makes it difficult to determine where the display ends and the bezels begin.

I think it would help if there was an option to display the menu bar within the application, which could be a way to give users a bit of margin at the top of their screen. I understand why the menu bar is hidden — to help users maintain their focus on writing. And although I appreciate Dreger’s decision to release the app without a settings screen, I find myself wishing I could glance at the top of my screen to see what time it is.

As for the select-all shortcut, it’s absolutely genius. Edit doesn’t have the ability to save multiple documents — you get a single text field and that’s it. So if you want to start from scratch, the select-all button gives you a quick and easy way to delete everything.

I have found myself wishing that double tapping the select-all button would delete everything automatically, though. Currently, you’ll have to tap the select-all button and then use the delete key on your keyboard. I could see downsides of a shortcut like this, but perhaps displaying a modal dialog to confirm the action — with the ability to skip it in the future — would be sufficient. But this would inevitably lead to an additional option, if you’d like to turn those confirmations back on in the future.

Speaking of selected text, as an aside, it would be really neat if the text counter switched to displaying the number of selected words or characters when there was a text selection on screen. This could be useful if you were drafting a tweet or message with a number of different wordings, separated by a line break, but wanted an easy way to check the character count of each. In fact, this is the kind of feature I’d like to see in every writing app.

Taking a step back for a moment, Edit doesn’t have the ability to save multiple documents within the app. Which begs the question, how do I save text once I’m done with it? That’s where the share button comes in. Edit utilizes the system’s share sheet to let you send your text to just about any application on your device. This is the key takeaway for this app and what sets it apart from other writing apps. Edit isn’t a place for long-term text storage, it’s a place for writing. 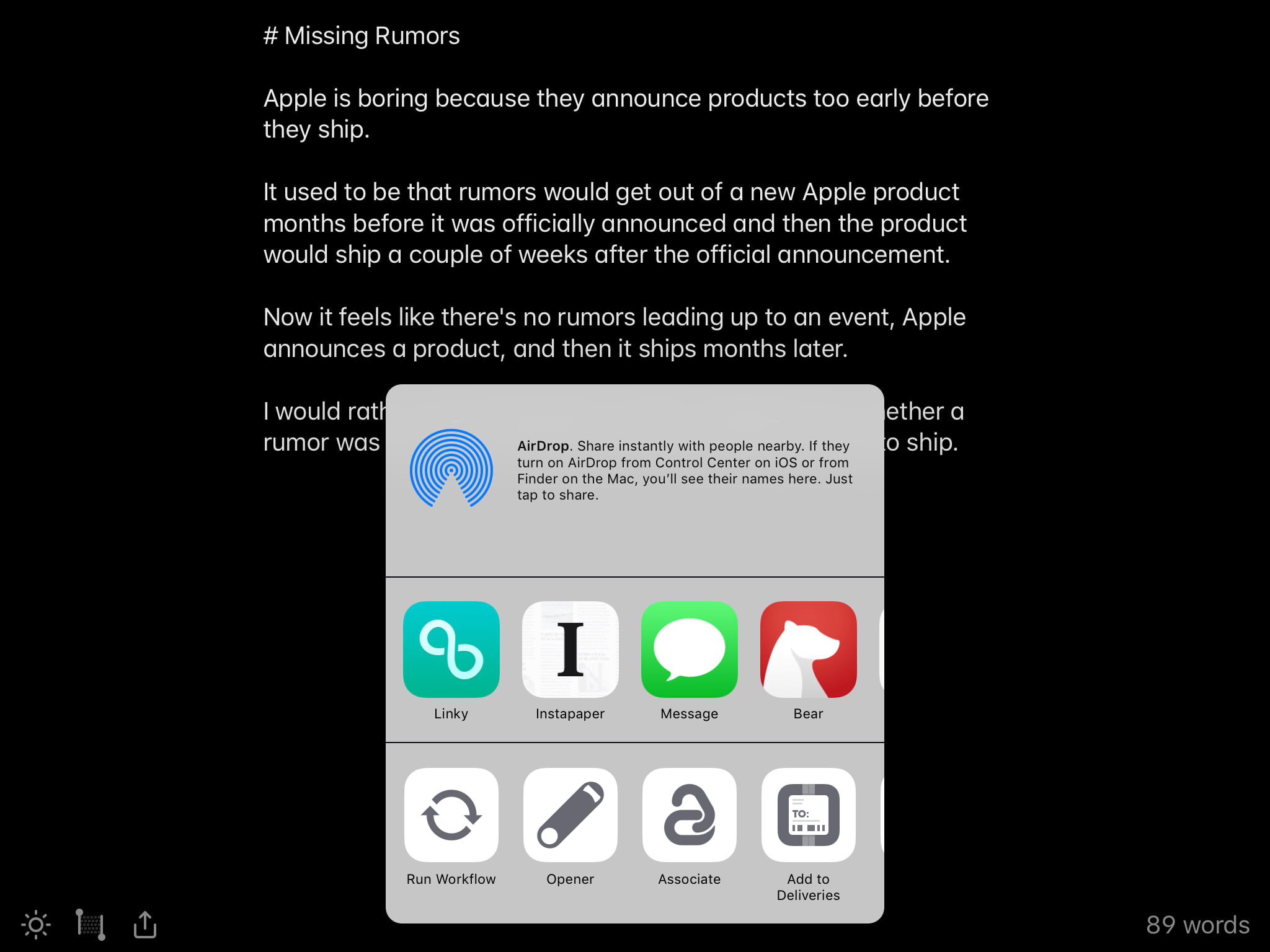 If you want to write an article, take a note, draft an email, compose a tweet, or do almost anything with text, start in Edit. Once you have something presentable, use the share sheet to send it to Bear, Newton, Ulysses, Day One, Linky, or whatever the most appropriate application might be. Edit isn’t a one-stop shop for all of your text needs, its part of a bigger workflow that utilizes a number of other applications. It lets you quickly get text down in a focused environment and you can figure out where its going to live once your done.

Aside from the handful of minor complaints mentioned above, I would also like to see iCloud syncing added to the app. I have it installed on both my iPhone and iPad and it would be nice if I could start writing on one device and then pick it up on the other. And I would love if there were some typographic options as well. The app let’s you change the font size using pinch-to-zoom — which is brilliant, by the way — but there’s no way to change the app’s typeface.

Currently Edit uses San Francisco with some often unused OpenType alternative characters to create a familiar feel while maintaining its own uniqueness. And while I think this is a great decision out of the gate, I’d still like to see a few more options in the future.

I spoke with Dreger about many of these feature ideas and he seemed very receptive to them, specifically mentioning that syncing was high on his list of priorities. But of course, syncing isn’t a simple feature and it would take a lot of experimentation and research to figure out exactly the best way to implement it. I have confidence that we’ll see it in the future, but don’t expect it anytime soon.

Overall, I think K.Q. Dreger made all the right decisions with Edit’s initial offering. Utilizing the share sheet and the select-all shortcut to eliminate the need for storing multiple documents is such a brilliant idea. I still think its a few small features away from becoming an absolute must-have. But despite that, Edit has become an important part of my writing workflow because it’s core set of features are rock-solid and the application is such a delight to use. This is the kind of app that just about anyone could benefit from using.