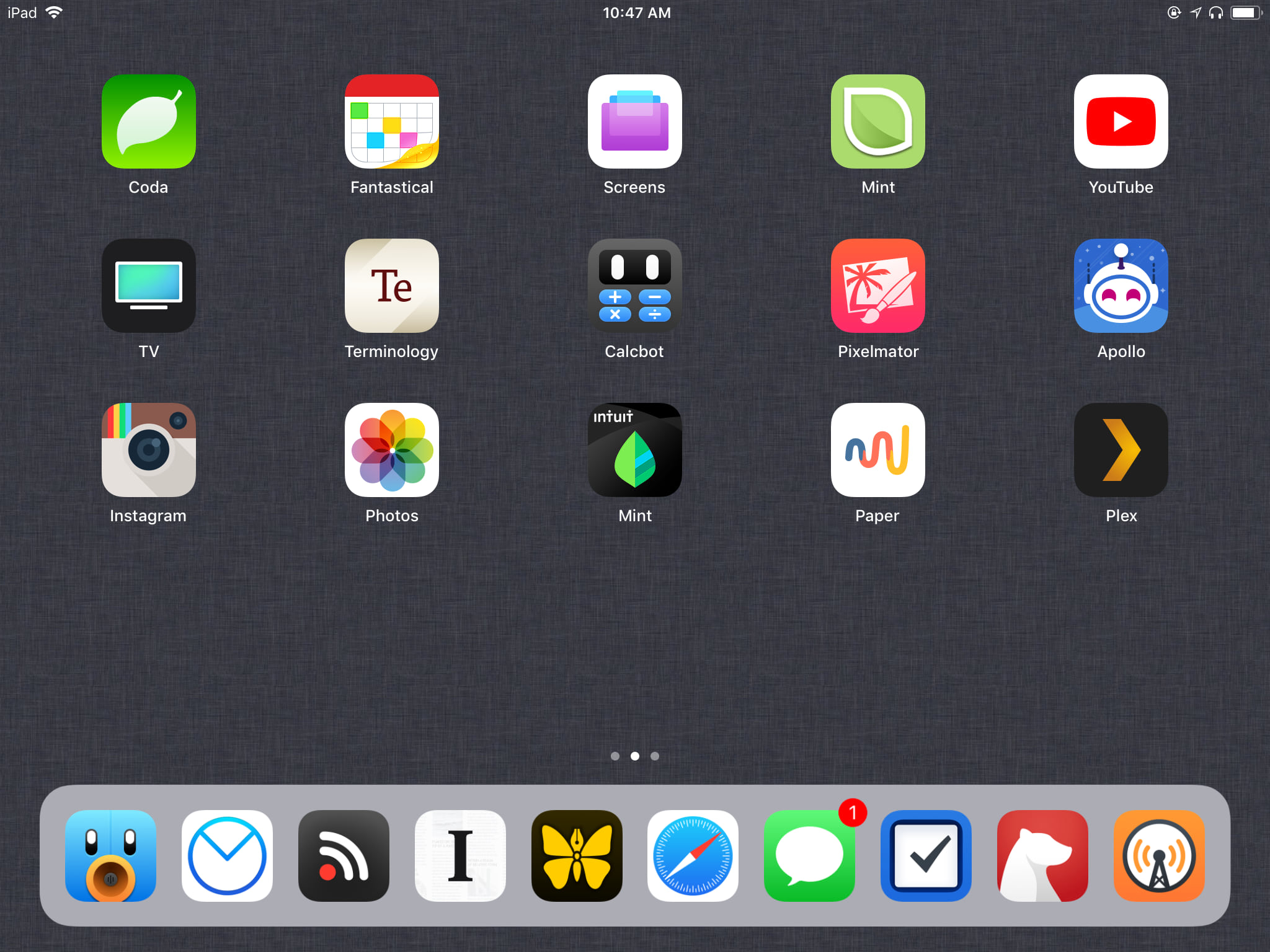 1Password has been moved to my second home screen and replaced with Apollo. I knew that I usually interacted with 1Password through the app’s action extension, but I only just recently realized how infrequently I launched the app directly. There was no reason to keep the app on my first home screen when that slot could be filled with an app that I launch more often.

Along those same lines, Workflow is another application that I don’t launch directly all that often. Now that I have a solid base of useful Workflows built up, I typically launch the app through a home screen shortcut, the application’s widget, or action extension. It has been replaced by Paper, which I use to sketch out ideas or to draw crude diagrams for visualizing my thoughts.

After linking to Josh Ginter’s piece on Lire, I went down a rabbit hole of reevaluating the RSS reading apps on iOS. I’ve switched from Reeder to Unread for now. I don’t know if I’ll stick with it long term, but there’s a lot to like about the application. If I find that I have enough to say on the topic, I might be writing about it in the future. 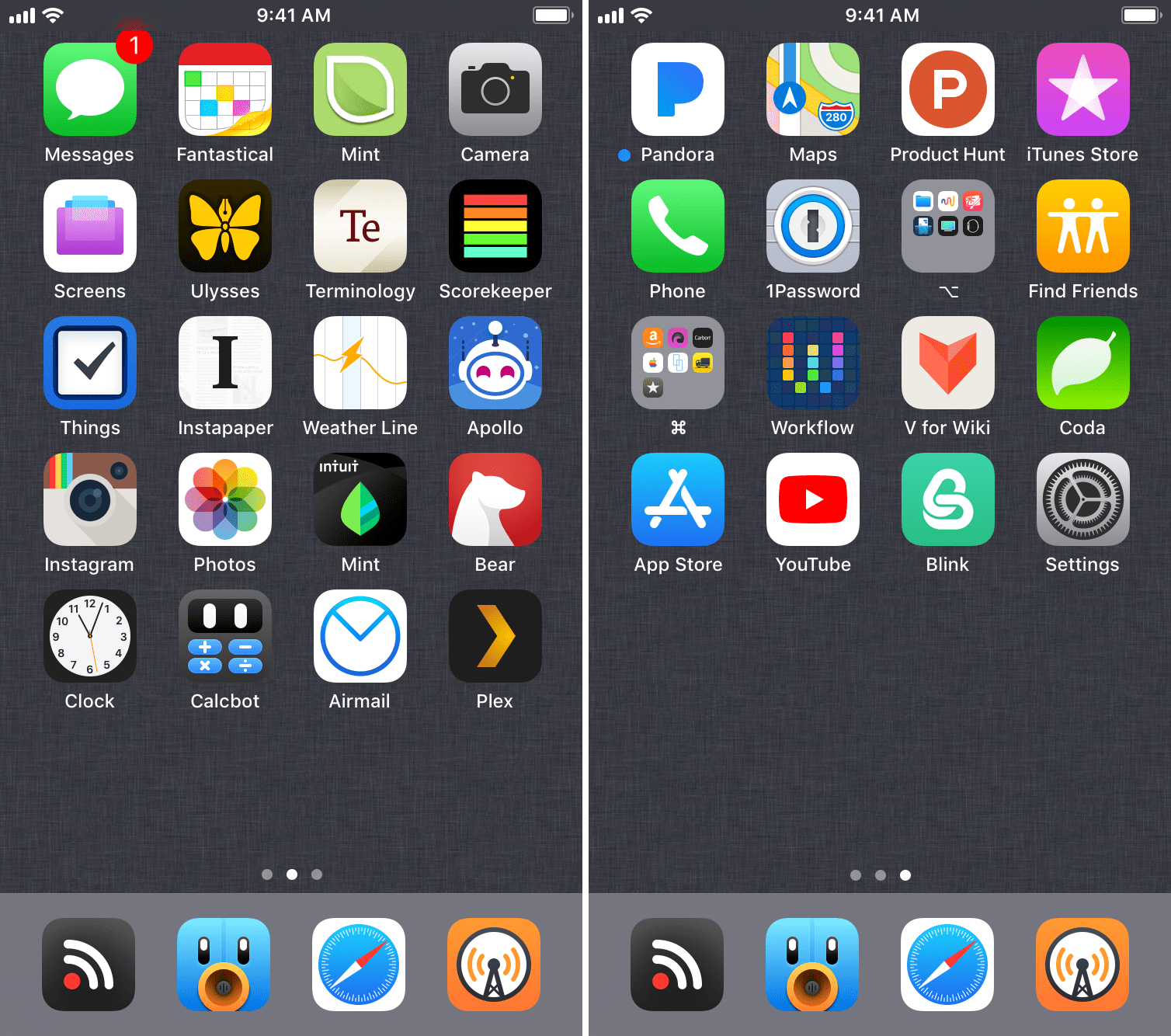 Like on iPad, I’ve also moved Workflow to my second home screen, replacing it with Apollo. And I’m using Unread in the dock instead of Reeder. You might notice that Reeder is still hanging out in my ⌘ folder, that’s what I typically do when I’m trying out replacement apps. This way, if I decide to go back to my old go-to, I don’t have to download and reconfigure it to my liking — it’s already ready to go.

The biggest changes I’ve made are in the second home screen. I’ve completely reorganized these apps, making an effort to keep the ones I use most towards the bottom of the screen and at the top level of each folder.

There isn’t too much differentiating the items in each of those folders. The ⌘ folder only has one page whereas the ⌥ folder has as many as I need to house the rest of my applications. I try to fill the ⌥ folder with Apple’s default applications and apps that can be better thought of as system extensions — widgets, action extensions, primarily Watch-based apps, etc. But that concept isn’t as rigid as it could be. There are a lot of applications in the ⌥ folder that could just as easily live in the ⌘ folder.

The only notable addition to my iPhone’s home screen is V for Wikipedia. I purchased the app after seeing it on Federico Viticci’s home screen and I’m still trying to integrate it into my life. But I’ve realized that I don’t actually use Wikipedia as often as I thought I did. Maybe this past month has been an anomaly, but I’ll keep V around for a little while longer to see if I start using it more often.

Things has become further ingrained in my day-to-day life and because of this, I never found myself using my old modular face with Carrot Weather as the center complication. Initially, I pared it back to the Things-focused Modular face and the Utility Watch face.

I switched to the Modular face when I was at work or trying to accomplish tasks at home and I’d switch to the Utility face whenever I was doing more leisurely activities. This worked just fine, but I no longer had WaterMinder’s complication available on any of my Watch faces. I ended up throwing WaterMinder in my Watch’s dock and also added it to my iOS device’s widgets to increase the number of interaction points and, hopefully, continue tracking my hydration.

The other major addition was the Rose Red-colored Modular face, which I use when I go to bed. I thought it was a good idea to start tracking my sleep and used my old Series 0 to do so at first. But, by switching back and forth between two watches, I started having problems keeping Things in sync. I’ve settled into using my Series 3 for sleep tracking and my day-to-day carry. I set my Watch on the charger for about thirty minutes before I go to sleep and that usually gives me enough charge to make it through the following 24 hours.

The complications on my bedtime Watch face: