Electricpig reports of a workaround in the EyeTV ($4.99) application for the iPhone. When connecting to your home computer over 3G, an attempt to stream live television to your device will display a warning on your screen. But, Electricpig says (and I can confirm) that tapping on the text of that warning, rather than the “OK” button will let you stream the content anyway.

Shortly after the find, Apple pulled the application from the App Store and Elgato then issued a statement saying:

Apple has removed the Elgato EyeTV App from the App store this morning, due to concerns about live TV streaming over the 3G network.

Elgato also says that the workaround was enabled because there was some test code accidentally left in. Elgato has already submitted a 1.0.1 update to the App Store that disables the workaround. Oddly enough, overnight the application reappeared on the App Store, the 1.0.0 version, not the update.

The reappearance of the EyeTV app, with the 3G streaming workaround still intact, could show signs that Apple is backing down on this restriction. AT&T has already announced that it will be allowing VoIP applications to operate over their network — could this mean that they will allow streaming television as well?

Whether they do or not, if you already own a copy of this application I would suggest keeping the 1.0.0 version around to use, just in case. 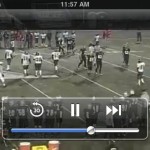 Update 10/20/09: The 1.0.1 version of EyeTV has hit the App Store, aside from the regular bug fixes it does break the 3G streaming workaround. I’ve kept the old version rather than upgrading — this is the first time I’ve wanted to keep an old version of an iPhone app and it makes me wish I could tell iTunes that I want to skip an update.

Update 12/17/09: With EyeTV update 3.3 Elgato has added a free 3G streaming feature. No need to keep around that old version of the EyeTV iPhone app. All you need is a My EyeTV account and you can view live and recorded content with your iPhone by visiting http://live3g.eyetv.com/ in MobileSafari.